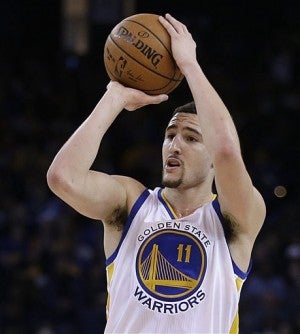 OAKLAND, United States–Klay Thompson set a National Basketball Association record for points in a quarter, netting 37 of Golden State’s 41 points in the third en route to a 126-101 demolition of Sacramento.

Thompson, who finished with 52 points after leaving at the 9:28 mark of the fourth quarter, made all 13 of his shots in the third, with nine of them coming from three-point range.

Thompson carried the Warriors on his back in the third Friday night as he single-handedly turned a Kings’ lead into a Golden State blowout.

“I never shot like that,” Thompson said. “Every time I touched the ball I was going to shoot it.

“Honestly, I was just really focused, hitting some tough shots and in a great flow.

“Even I am shocked. That’s crazy.”

The previous record was 33 points by George Gervin in 1978 and Carmelo Anthony in 2008.

During a 5:25 span of the third, Thompson poured in 19 straight Golden State points and potted five triples during the blitz. He outscored the Kings 37-22 in the period.

Thompson finished 16-of-25 from the field overall and was 11-of-15 from long distance.

Read Next
Is Manny Pacquiao dabbling in wrestling this time?
EDITORS' PICK
New virus has infected more than 77,000 people globally
Mallorca City: Home of Cavite’s finest industrial hub
US intel officials say Russia boosting Trump candidacy
Filipino among new cases of COVID-19 in UAE
The fight of the decade: The Gypsy King vs The Bronze Bomber
Baldwin sees less reliance on PBA in Gilas’ future
MOST READ
‘AshMatt’ nuptials: ‘Divine knowledge’ leads to blotter entry
LOOK: Heart Evangelista wears ‘Quiapo headband’ at Paris Fashion Week
Mark Bautista on love: ‘She has to be understanding of my situation, that I’m bisexual’
Agot Isidro commends ‘resistance’ following ABS-CBN rally: ‘Welcome to the fold’
Don't miss out on the latest news and information.