Pacquiao: God will deliver Mayweather into my hands 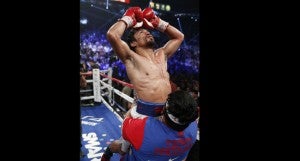 Manny Pacquiao, of the Philippines, celebrates in this April 12, 2014, file photo after his unanimous decision victory over Timothy Bradley in their WBO welterweight title boxing fight in Las Vegas. The Filipino champion believes God will bring the defeat of Floyd Mayweather in their fight on May 2, 2015. AP

GENERAL SANTOS CITY, Philippines – “This is God’s will. This is the fight that will glorify God.”

Pacquiao said his fight with Mayweather would be a way to teach the American champion about the existence of God.

“I believe, God will deliver him into my hands. His defeat would make him realize that fame, money and material possessions are nothing without God in our life,” Pacquiao said.

Pacquiao described Mayweather as a nice person based on what he observed when they met during the NBA game in Miami, Florida, but added he has been excessive in his lifestyle.

A week before Mayweather signed the fight contract, Pacquiao said he already knew that the fight would happen after years of negotiations.

“We had an agreement that he would be the one to make the announcement to the media and I respected it,” he said.

Pacquiao said he was “excited to start my training.”

“But this is just like my other fights before,” he added.

Pacquiao’s was scheduled to fly to the US on Saturday.

He said he was informed that boxing fans were already eager to watch the fight because in just 15 minutes from the announcement of the megafight, all the tickets worth $1,000 to $5,000 for Pacquiao-Mayweather fight at the MGM Grand had been sold out.

According to him, pay-per-view will be pegged at as much as US$100 per buy.

He further revealed that they would use an eight-ounce glove for this megafight, which would unify the Welterweight crowns of three different world boxing bodies – the WBC, WBA & WBO.

The boxing legend started his light training Saturday morning by going 30 rounds on a sprint around his covered court just beside his mansion here.

In the afternoon, he spent two rounds in shadow boxing and punch mitts with one of his training assistants, Nonoy Neri.