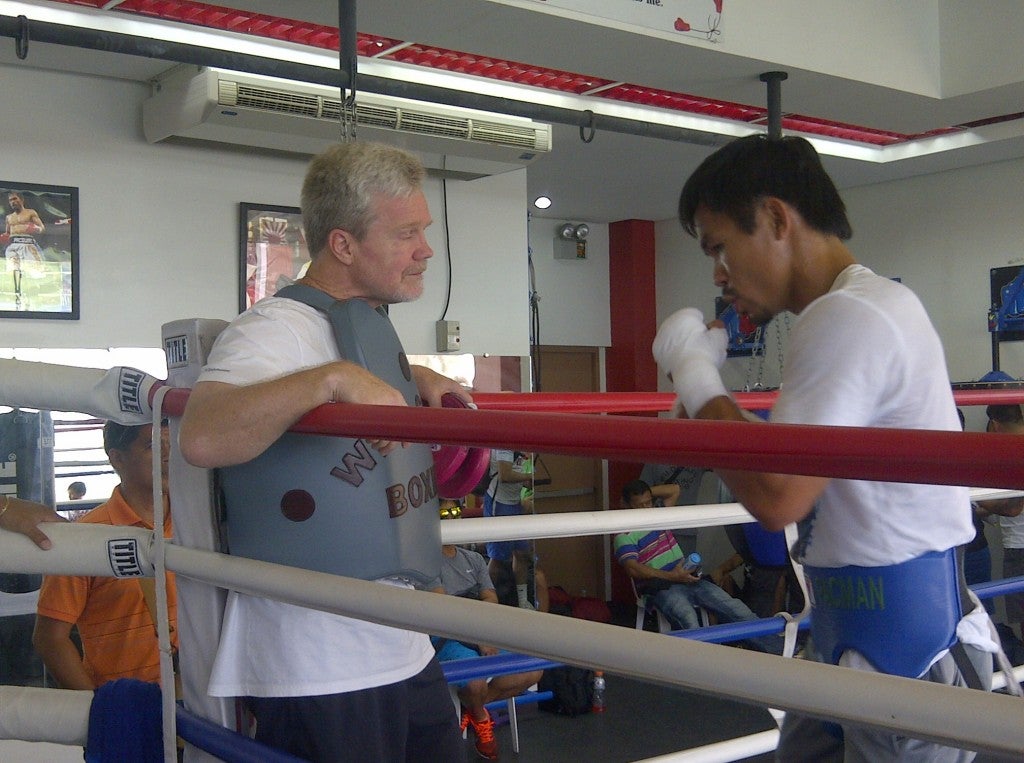 Manny Pacquiao goes through his shadow boxing routine inside the Wildcard Gym in General Santos City. Photo by Bong Lozada.

Trainer Freddie Roach, meanwhile, believes that Pacquiao’s speed, power and pressure will not only hand “Money” his first career defeat, but also a knockout.

“We don’t know what he’ll do (in the ring). He may not run, or he may run,” said Pacquiao yesterday before his KIA Carnival took the court at Smart Araneta Coliseum to battle Talk ‘N Text in a PBA commissioner’s Cup showdown. KIA won, 106-103.

“If he gets hurt, he’ll run. If not he’ll possibly engage,” said Pacquiao, who hopes to fire more punches than Mayweather can handle.

“I’ll use my left and right (hands),” said Pacquiao, who confirmed that he’s leaving for Los Angeles on Saturday.

Pacquiao will spend the early part of his training under strength and conditioning coach Justine Fortune and assistant trainers Buboy Fernandez and Nonoy Neri. Chief trainer Freddie Roach will take over on March 9.

Roach predicted a knockout in an interview with Craveonline.com, despite the fact that Pacquiao’s last stoppage came six years ago against Miguel Cotto.

“I think Manny beats Floyd, breaks him down, and knocks him out before it’s over,” Roach said in response to Floyd Mayweather Sr.’s claim that his son will beat the Filipino eight-division world champion.

Mayweather turned 38 Tuesday while Pacquiao is 36.