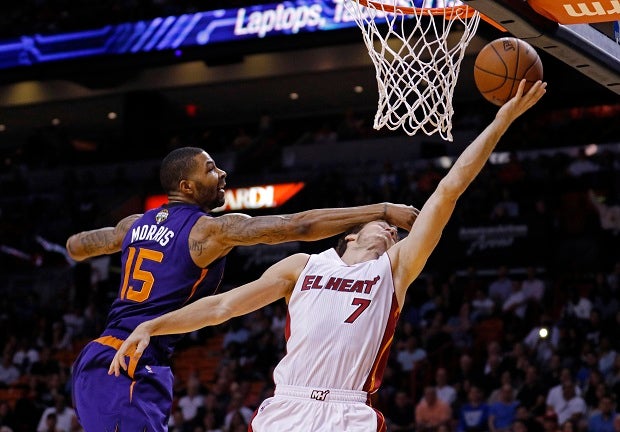 MIAMI, United States — Tyler Johnson scored a career-high 26 points and Goran Dragic added 21 against his former team as the Miami Heat beat the Phoenix Suns 115-98 on Monday night in a game that included two third-quarter altercations.

Hassan Whiteside finished with 17 points and 10 rebounds before getting ejected for Miami, which got 16 points and nine assists from Dwyane Wade.

Eric Bledsoe scored 20 for the Suns, who got 18 points and 13 rebounds from P.J. Tucker. Markieff Morris and Brandon Knight scored 13 apiece, and Alex Len had 10 points and 11 rebounds.

The story line was supposed to be Dragic facing the club that traded him to Miami last month, amid hurt feelings on both sides.

Emotions boiled over instead.

In all, there were five player technicals, three ejections and two flagrant fouls assessed in the third quarter alone, the 12 minutes of play needing 42 minutes to complete.

Morris was ejected for a flagrant-2 foul against Dragic in the third quarter, and Whiteside and Len were both tossed later in the period after getting tangled up under the Miami basket.

Curry brought the Warriors back from 10 points down with under 4 minutes left to tie it, but couldn’t get a final shot off after Jack’s jumper.

Curry finished with 26 points, 18 in the final period. Jack, however, calmly ran the clock down and shot over him as the Nets won their first game at home since Feb. 6.

Brook Lopez had 26 points and Deron Williams 22 for the Nets.

Andrew Bogut scored 16 for Golden State, but Klay Thompson shot 3 for 17. He was 1 of 9 on 3-pointers and finished with seven points.

Alan Anderson scored 16 for the Nets, who had played eight in a row on the road since beating New York at Barclays Center on Feb. 6, a 24-day stretch between home games that ranked as the longest in franchise history.

Now the Warriors can’t wait to get home, ending their six-game trip and a stretch of 10 road games out of 11.

Over in Minneapolis, Chris Paul had 26 points and 14 assists as Los Angeles allowed only one field goal in the fourth quarter to outlast Minnesota.

J.J. Redick scored 18 points before getting ejected in the fourth and DeAndre Jordan had 12 points and 18 rebounds, his ninth straight game with at least 15 boards. Glen Davis scored 12 points off the bench to help the Clippers get their seventh win in nine games.

Ricky Rubio had 18 points, 12 rebounds and 11 assists for the Timberwolves, who were missing starters Nikola Pekovic and Kevin Martin. Minnesota went 1 for 14 in the fourth quarter.

Gary Neal had 19 points and nine rebounds, but missed a forced 3-pointer with 9.3 seconds to go that would have tied the game.

In Philadelphia, DeMar DeRozan scored a season-high 35 points and Lou Williams had 21 as Toronto snapped a five-game losing streak with a win over Philadelphia.

Raptors coach Dwane Casey gave slumping All-Star and Philadelphia native Kyle Lowry another night off to rest. Even without their leading scorer in the lineup for the second straight game, the Raptors won for the first time since Feb. 20.

Nerlens Noel scored 17 points on 7-for-7 shooting for the Sixers.