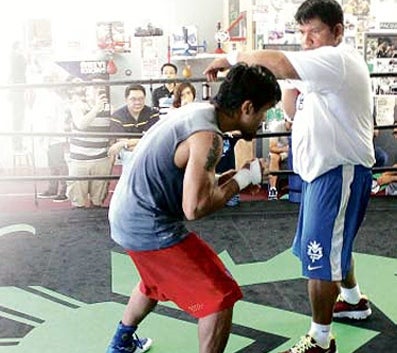 MANILA, Philippines — Manny Pacquiao trained in public in Day 4 of his training camp for his mega fight against Floyd Mayweather Jr.

Then he went full Rocky Balboa.

In a video posted in his official Instagram account, Pacquiao was decked in a hoodie, shorts, sneakers and a knit cap while shadow boxing to the delight of wide-eyed spectators who saw the eight-division world champion display his super human speed.

Pacquiao is faster than Sylvester Stallone’s mythical boxer, a trait that he’ll need to stop Mayweather, his Apollo Creed.

“I’m hoping to see the flurries. I’m hoping to see the combinations. I hope Manny Pacquiao ends up being relentless, because he’s going to need it if he really wants to win the fight,” said Thurman who’ll fight former Mayweather foe Robert Guerrero on Sunday (Manila time) in Las Vegas.
“I think Mayweather has aged more than Pacquiao. I say that because of how conservative his fighting style has become. I think it’s very strategic. I think that’s how he chooses to fight now in his later years. Manny still has some gusto in him. That’s the way he fights in the first place.”

Now, just change the children who jogged behind Balboa to the adult spectators and Philadelphia to Los Angeles and Pacquiao’s own Rocky montage is set.

Pacquiao now both mature and vicious