Lakers Nation has had little to celebrate the last three years, so when a rookie guard scored his career high in a road win, all mics and iPhones descended on him at the press session at the next day’s team practice.

That bright spot was Filipino American Jordan Clarkson, whose 22 points in a 100 to 97 comeback victory over the Utah Jazz included a stolen pass on one end, long flying strides finishing with a mesmerizing dunk on the other end. The regular press corps had to wait until Positively Filipino finished its allotted time with Jordan, because this interview was scheduled before his sensational night. 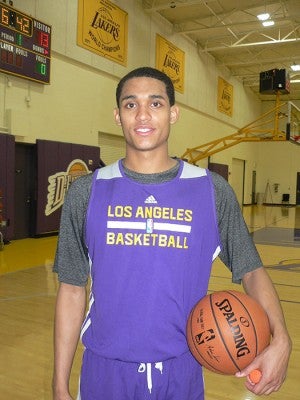 Clarkson at a practice prior to their game vs. the Milwaukee Bucks on February 27, 2015. PHOTO BY TINA MADDELA

Jordan wears number 6. He’s 22 years old, averages 8.4 points, 2.2 rebounds and 2.0 assists per game. Deep into the fourth quarter, the Lakers guard never stops hustling making opponents, all world-class athletes in their own right, look like Beefeaters outside the Tower of London. If the Lakers are starting a youth movement, he’s the prototype and a glimpse of good things to come.

On February 21, Byron Scott told the Los Angeles Times, “I keep getting excited about that kid because his growth is getting better and better.”

Jordan was drafted out of the University of Missouri in the second round by the Washington Wizards and was promptly traded to the Los Angeles Lakers, which signed him on August 25, 2014.

Playing for Coach Byron Scott and with Kobe Bryant is a dream come true. “They’re the icons of LA,” Jordan describes his good fortune. “I wasn’t old enough to see Coach Scott play, but you hear stories about the Showtime Lakers. I grew up watching Kobe. It’s crazy to play with two legendary guys like that.”

Jordan is soft-spoken with a Texan drawl in his voice reminiscent of Bradley Cooper in American Sniper. It’s tempting to call him the Filipino Sniper for his perimeter shooting, but he’s better known for rocking the rim at close range. Clarkson is the first Fil-Am to play in the NBA since Raymond Townsend played from 1978-1982. NBA PHOTO/LOS ANGELES LAKERS

The son of military parents, Jordan was born in Tampa, Florida, before moving with his family to Austin, Texas, and finally San Antonio, where he starred on a Karen Wagner High squad that won 105 of 119 games during his three seasons on varsity. The San Antonio High School Player of the Year and fourth-best prospect on Texashoops.com played two years at Tulsa University in Conference USA before ending his collegiate career with Mizzou, where he was Second Team All-Southeastern Conference in 2013 to 2014.

Even though he was named after Michael Jordan, Jordan considers himself a late bloomer. “I started playing on a team in seventh or eighth grade,” he said. “Before that I only played on the street and in a church league.”

He had to deal with adversity as a kid. His parents Mike Clarkson, an African American, and Annette Davis divorced when he was small. The Filipino household of Annette and his grandmother offered comfort food. He gets his taste for chicken adobo and lumpia from these women from Angeles City, Philippines.

Annette and Mike met in the U.S. Air Force Reserve. Before his parents split up, Jordan recalls his father also supporting his family as an auto detailer. “We didn’t have much when I was growing up. We came through a lot together, so it’s a good feeling to be here,” Jordan says looking around the Lakers training facility in El Segundo.

What makes Jordan an authentic Filipino is his respect for his elders. Having always known his grandmother exclusively as his lola or grandma, calling her by any other name was unthinkable. “My grandmother speaks Tagalog and she has a real Filipino name,” he says in reference to a mystery name he has trouble pronouncing.

Jordan has a profound respect for his family. “My mother and grandmother taught me to be strong. They were raised in poverty in the Philippines. Coming to the States was hard for them. They gave me my work ethic.”

Someday, he hopes to find a woman like his mother. “I want a strong, independent woman. It’s got to be that way. The NBA is a tough business.”

Physically, he inherited his 6’5 frame from his 6’1 father and 5’10 mother. His reputation for monumental dunks seems improbable for a tall guard weighing just 185 pounds. He’s built wiry like one of the Lakers in artist Ernie Barnes’ “Fastbreak.”

Jordan’s dad was able to watch his first career start against their hometown San Antonio Spurs on December 12, 2014. “My mother couldn’t make it because she was busy with my little brother that night. We didn’t have a large crowd, but I knew everybody was watching.”

Part of the fun of joining the Lakers is working with some delightful teammates like Nick “Swaggy P” Young and the other Asian-American Laker, Jeremy Lin. Seven-foot center Robert Sacre is the only player who ribs Jordan about his Filipino background. “He kind of makes fun of me. He says, ‘Want some lumpia, want some lumpia.’ Sometimes, he calls me Pacquiao,” Jordan laughs in the direction of his ursine teammate who’s practicing layups at the other side of the gym. 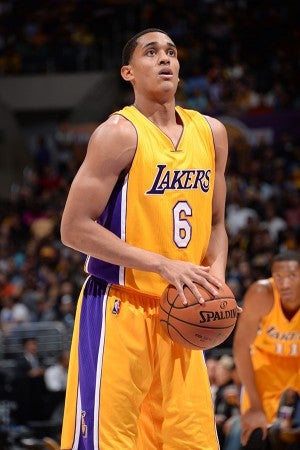 Whenever he’s on the court, Jordan is conscious that Filipinos everywhere are rooting for the first Pinoy to make an NBA roster since Raymond Townsend played for the Indiana Pacers and the Golden State Warriors from 1978 to 1982. “I’ve really grown aware of my Filipino heritage since I came out here. I do my best to represent Filipinos well. They’re always on my mind.”

Jordan will certainly be paired with 2014 Lakers lottery pick Julius Randle in the NBA Summer League, but fans overseas should keep their binoculars trained on the hot, undulating tarmac of Ninoy Aquino International Airport. This summer Jordan makes his first trip to the Philippines. “My agent is working on some things for my visit. I’m hoping to be on the Philippines National Team,” announces Jordan.

With a supersonic journey that’s going from domestic to international, Jordan still has no trouble adjusting his sights to the next game. Once he satisfies the curiosity of the phalanx of reporters the morning after his big game, he can dial his attention to the game ahead against the Milwaukee Bucks. In it, Number 6 would pour in 16 points in a second straight victory for the Lakers. After shooting two for two from the three-point arc, Jordan Clarkson might be the Filipino Sniper.

To read more stories on the Filipino diaspora, go to PositivelyFilipino.com