“I’m very happy that they all liked it,” said Pacquiao, who bought the 930-square-meter (10,000-square-foot) mansion last week.

Sellers Gail and Roger Dauer, who still live in the house, said they made sure they were well-prepared for the Pacquiao family’s visit.

Roger Dauer said he made sure the bar was well-stocked with orange-flavored Gatorade, Pacquiao’s favorite drink.

Members of Pacquiao’s extended family, including his aunt Lilia Lao, also took a tour of the property in the gated hilltop community.

Lao said she was told that the property tax would amount to $180,000 (P8 million) a year, on top of the cost of maintaining the property, which the seller’s agent Elsa Nelson estimated at $50,000 (P2.3 million) annually.

Lao said she would also need extra help in managing the two-story, seven-bedroom house and the huge backyard featuring a salt-water swimming pool with a fountain and spa, several fire pits and patios. 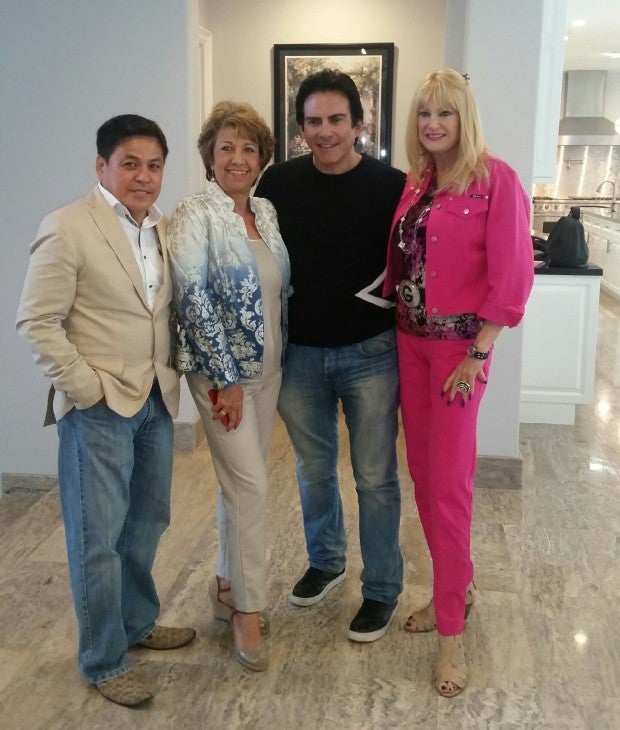 The house also features a grand entryway with an elaborate spiral staircase and a large crystal chandelier, a chef’s kitchen, a state-of-the art media room and a family room with a sports bar.

Several pieces of furniture that came with the house purchase were designed by actress Jane Seymour in collaboration with famous furniture designer Michael Amini, said Nelson.

Nelson declined to say how much the final selling price was but said it was very close to the asking price of $12.5 million (P562.5 million).

“The asking price was just for the house but they negotiated to include everything inside the house,” Nelson said.

Nelson, in turn, negotiated for Pacquiao to include as part of the deal four tickets to the May 2 megafight in Las Vegas between Pacquiao and the American Floyd Mayweather Jr.

“Yes, we are going to see the fight of the century,” said seller Gail Dauer, who asked for tickets for her, her husband, Roger, and their daughter and son-in-law.

Nelson said two other buyers offered more money for the property but the fight tickets helped clinch the deal for Pacquiao.

Pacquiao’s agent Nick Enciso said he was expediting paperwork so the Pacquiao family could start moving in first week of April.

Hooray for Hollywood: The Pacman is next door