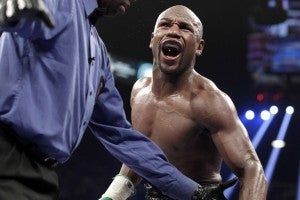 Floyd Mayweather Jr. of the US reacts accusing Marcos Maidana of Argentina on September 13, 2014 at The MGM Grand, Las Vegas. AFP FILE PHOTO

BEFORE Floyd Mayweather Jr. became “Money” and surrounded himself with gold, he settled for an Olympic bronze.

And during those times, two Filipino boxers almost traded punches with him.

“Brin was supposed to spar with Mayweather,” Nolito told Ramos.

Onyok and two other Filipinos, Elias Recaido and Virgilio Vicera, sparred with the American Olympians but US Coach Al Mitchell did not allow Mayweather to join the sessions.

“Brin was too big for Mayweather,” Nolito said. “We didn’t have a boxer who was on the same weight class as Floyd.”

Mayweather was a featherweight in 1996.

Canoy had the opportunity to face Mayweather in the Games itself but he crashed out in the qualifying tournament.

On record, Manny Pacquiao would be the first Filipino to fight Mayweather as they will go toe-to-toe on May 2 (May 3 in the Philippines) at MGM Grand Garden Arena to unify the WBA, WBC, and WBO Welterweight titles as the culmination of an almost six-year saga. AC