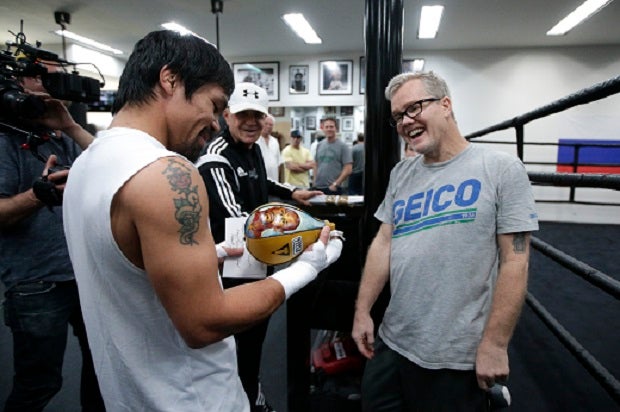 Boxer Manny Pacquiao, left, of the Philippines, and his trainer Freddie Roach share a laugh as they look at a speed bag showing an images of Floyd Mayweather Jr., a gift from lawyer Robert Shapiro, background center, Monday, April 13, 2015, in Los Angeles. AP

LOS ANGELES, United States — Manny Pacquiao says he intends to put on a show when he faces Floyd Mayweather Jr. in 2 1/2 weeks.

For the fans’ sake, he really hopes Mayweather is also coming to fight.

Pacquiao radiated confidence and excitement Wednesday at the Wild Card gym in Hollywood before his latest workout in preparation for their bout May 2 in Las Vegas.

Both fighters kept their public comments civil and mostly respectful this week, but Pacquiao laughed when told that the defense-minded Mayweather had called him “a very reckless fighter.”

Pacquiao says people love that aggression because it makes for exciting fights.

He also says he hopes Mayweather will abandon some of his usual caution, both because the fans would love it and because it would play into Pacquiao’s plans perfectly.

Pacquiao-Mayweather: in the eyes of common foes