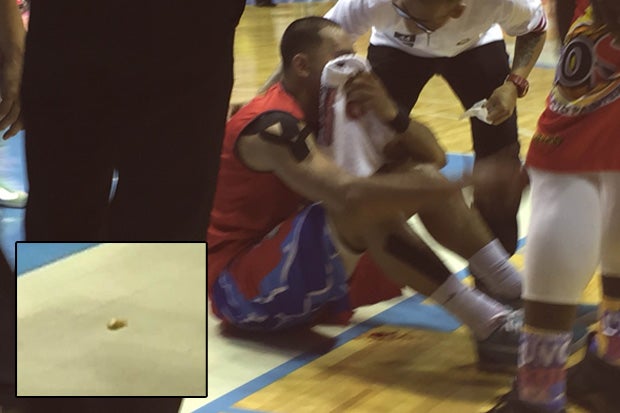 Not even an elbow to his face.

When Lee lost a tooth midway through the third quarter after getting hit by Ivan Johnson’s elbow square to the face, everyone thought he was done for.

But like  an action hero rising from impending defeat, Lee nonchalantly walked back to the parquet floor of Smart Araneta Coliseum, sat back on the Rain or Shine bench and proceeded to exude his aura of swagger.

“I told coach Yeng [Guiao] that I will return to the game,” Lee said. “I want to show to my teammates that I want to win.

Lee started to walk to the scorer’s table, sat on the speakers, the same speakers that his coach tripped on, and waited for a dead ball so he can enter.

Already with 15 points at that moment, Lee needed a couple of possessions before making his impact anew when he dished to the open Gabe Norwood on the break for a two-handed jam that gave the Painters a 107-90 lead near the end of the fourth.

He then capped his tremendous showing with a layup for a 109-94 edge.

“It’s good that we won, whatever happens to me, even If I get hurt, I shall return,” Lee said. “I want to finish the championship and win.”

With the 109-97 win, the Elastopainters pulled ahead of the Texters in theoir best-of-seven PBA Commissioner’s Cup finals series. CC