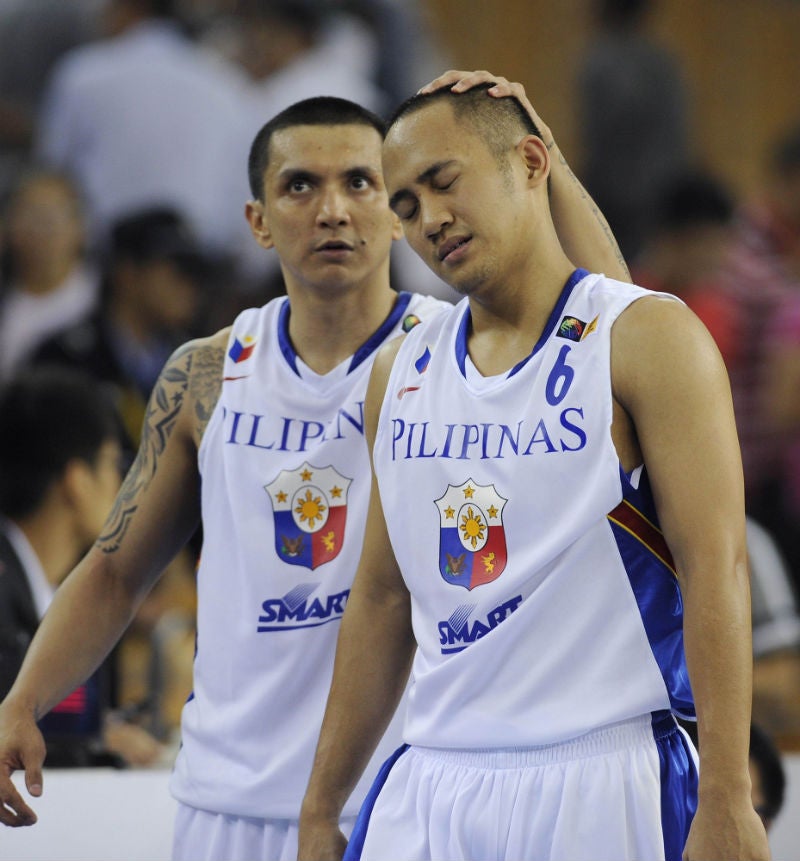 WUHAN, China—Smart Gilas Pilipinas wasn’t spared by the curse that had left many past national teams wallowing in despair against South Korea.

The hot-shooting Koreans pulled off yet another incredible come-from-behind win Sunday, squeezing out a 70-68 win over the Nationals in the bronze-medal match of the 26th Fiba Asia Championship here.

Trailing by four in the last three minutes, the Koreans blitzed their way in front with successive three-pointers and eventually prevailed when the Filipinos sealed their doom by muffing five of eight free throws in the last 38 seconds.

“Everything was a disaster in the last three minutes,” said PH five coach Rajko Toroman. “We were so close to the qualifying tournament for the Olympics and we didn’t make it.

“We deserved to win but we played for just 37 minutes. My players were crying and it’s a difficult time for us,” added Toroman, spearhead of the three-year national team program that looked on the way to its target until Jordan crushed the Filipinos in the semifinals Saturday.

Out of Fiba Olympic qualifier
South Korea and the losing finalist between China and Jordan, whose game was still being played at presstime, will complete the 12-team roster in the Fiba Olympic Qualifying Tournament, where the three medal finishers clinch Olympic berths in London.

Douthit’s three-point play and two free throws gave Smart Gilas what looked like a comfortable 59-50 lead with 4:53 to play.

But power forward Oh Sek-eun clustered seven straight points capped by a fadeaway jumper in the middle to keep the Koreans close, 57-61, before Cho Sung-min and Moon Tae-jong came up with three-pointers that boosted them ahead for the first time at 67-65.

Marcio Lassiter could have forced a deadlock at 69 but missed his second free throw. Douthit grabbed the miss but the ball slipped from his grasp with seven ticks left.

The heartbreaker that came closest to the latest PH meltdown happened in the 2002 Asian Games when Lee Sang-min buried a triple at the buzzer that denied the team made up of PBA stars from advancing to the gold-medal match against China.

It was the same ghost that haunted the PBA-powered national team in 2009 in Tianjin, China, when it lost seventh place to the Koreans despite leading all the way.

Smart Gilas also lost to the Koreans in the quarterfinals of the Guangzhou Asian Games last year.

“We’re not an experienced team—these guys are just first-timers in Fiba,” said Toroman. “But at least we made an impact. In future tournaments, we’ll get better and better.”

If it’s any consolation, it was the best finish by the national team in 24 years.

Europe’s Russia, Macedonia, Lithuania and Greece have already made it into the Olympic qualifier in July 2012 along with the America’s Puerto Rico, Dominican Republic and Venezuela. Africa will be represented by Angola and Nigeria while Oceania will have New Zealand.

Venezuela, Puerto Rico, Lithuania and Macedonia are bidding to host the final qualifying event for London.

Pep talk in the dugout

Samahang Basketbol ng Pilipinas Manny V. Pangilinan gave a pep talk in the dugout to motivate the players before the game after the confidence-deflating setback against Jordan.

Smart Gilas exploited the absence of the injured 7-foot-3 Ha Seung-jin (shoulder) and starting point guard Yang Donggeun (knee) in the first half.

Kelly Williams’ dunk ignited a 10-0 charge that gave the Nationals an early 12-5 lead and Douthit, Jimmy Alapag and Ranidel De Ocampo stretched the advantage to 24-11 with less than two minutes before the break.

The Nationals stayed in complete control until the Koreans caught fire down the stretch.