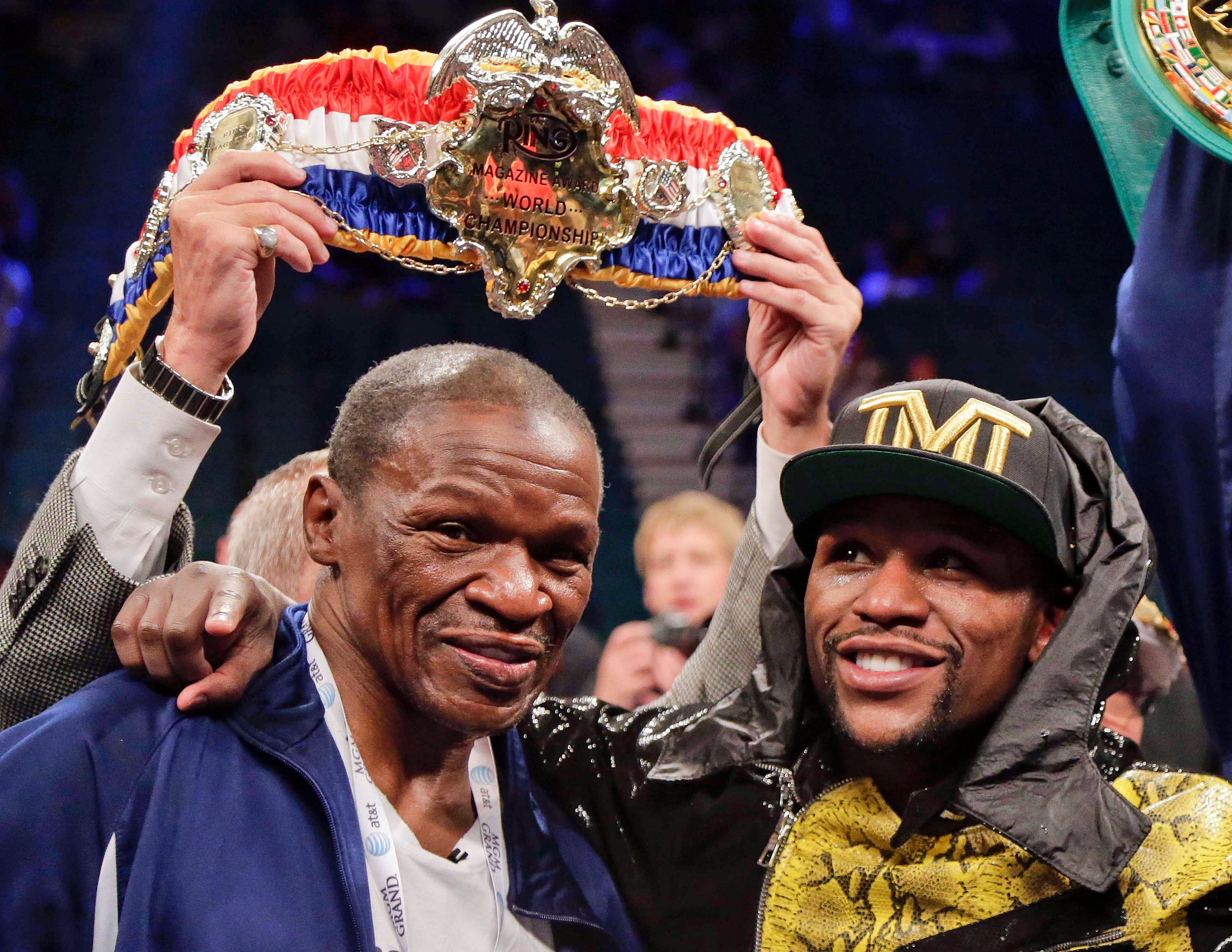 In this May 4, 2013, file photo, Floyd Mayweather Jr., right, poses for photos with his father, Floyd Mayeather Sr. after defeating Robert Guerrero by unanimous decision in a WBC welterweight title fight in Las Vegas. He taught his son to throw punches before he could walk, and he’ll be in his corner for the biggest fight of his life against Manny Pacquiao on May 2. The relationship betwee Mayweather Sr. and his son, though, hasn’t always been good. AP

LAS VEGAS, United States — Floyd Mayweather Sr. remembers the moment he discovered his son had a feel for the family business.

Floyd Jr. was just 9-10 months old, not even walking yet. But his father had been showing him how to hold his hands in a boxing position, a skill young Floyd would learn quickly.

“One day I came into the room and he’s laying back on the pillow doing just what I was showing him,” Mayweather Sr. said. “I said, ‘This is it. He’s going to be a fighter.'”

It wasn’t long after that when the two had another kind of father-son moment. This one, too, lives in Mayweather family lore, but for a different reason. In this May 4, 2013, file photo, Floyd Mayweather Jr., right, listens to his father and trainer Floyd Mayweather Sr. after the third round against Robert Guerrero during a WBC welterweight title fight, in Las Vegas. AP

At end of gun’s barrel

Floyd Sr. was facing the wrong end of a shotgun, aimed at him by his brother-in-law during a dispute in Grand Rapids, Michigan. Mayweather was holding his year-old son and, like the boxer he was, was thinking on his feet.

“I wasn’t going to put that baby down,” he told the Los Angeles Times in 2012. “I didn’t want to die. It wasn’t about putting my son in the line of fire. I knew he wouldn’t shoot the baby. So he took the gun off my face, lowered it to my leg and bam!”

The shotgun blast destroyed most of Mayweather’s left calf, and pretty much ended his career as a welterweight contender. He would fight on, but his mark in boxing would end up being made in other ways.

Floyd Sr. isn’t exactly the guiding force behind the fighter who will make a record purse of some $180 million or more to fight Manny Pacquiao. He has spent long stretches of time estranged from his son, and was in prison on a drug conviction when Floyd Jr. fought in the 1996 Olympics before turning pro.

But he’s the trainer who helped teach his son defense and has stressed it for every fight he’s been involved in. And he’ll be in the corner next week at the MGM Grand arena, confident as ever in the abilities of a fighter who was throwing punches before he learned to walk. 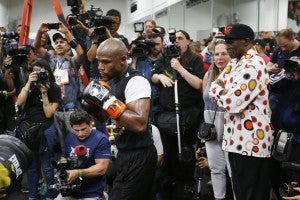 If this is the new normal for the Mayweathers, it wasn’t always that way. The two publicly feuded for more than a decade and were so much at odds in 2007 that Floyd Sr. nearly took a job training Oscar De La Hoya against his son in the fight that made Floyd Jr. a household name.

But he’s replaced his brother, Roger, for Mayweather’s last four fights, a reconciliation the younger Mayweather sought partly because he felt he got hit with too many shots against Miguel Cotto and wanted his father’s help in slipping punches.

They’ve also patched up things outside the ring, at least for now.

“I probably wouldn’t be a fighter if it wasn’t for my father,” Mayweather said. “As long as he knows I love him and I went out there and when I fought I didn’t just fight for myself, I done it for the both of us. I think he should be happy with that.”

In addition to his training duties, Mayweather’s role in this fight promotion has also been as the foil to Freddie Roach, Pacquiao’s trainer. Roach said when the fight was announced that Floyd Sr. wasn’t much of a cornerman and that he was happy to learn that he would be working his son’s corner.

A poem of sorts for Pacman

That got Floyd Sr. riled up enough to come up with a poem of sorts about his training counterpart.

“Manny moved from first class to the coach with the roach,” he said. “Now he’ll be sprayed with Raid and underpaid. He’ll be gone just like the roaches go when the lights go on.”

It’s a long way from the federal penitentiary in Michigan, where the older Mayweather spent more than three years for selling cocaine before being released in 1998. He’s 61 now, recovering from the lung disease Sarcoidosis, and living the life in an upscale gated community in Las Vegas.

He’s more concerned about his son losing his money than losing the fight. He believes in Floyd Jr.’s defensive wizardry, and believes he hasn’t slowed a bit at the age of 38.

Like a proud father, he also believes his son is the best.

Oh, and don’t forget his trainer, too.

“He’s the best, ever, yes,” Mayweather said. “And this is Floyd Mayweather Sr., the main man behind him.”