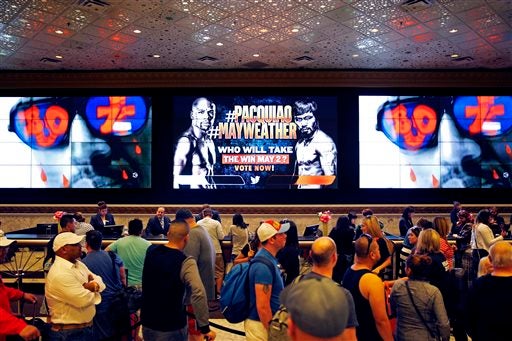 A screen shows an advertisement for a fight between Floyd Mayweather Jr. and Manny Pacquiao as people wait to check in at the MGM Grand on Friday in Las Vegas. The fight is scheduled to take place May 2 at the hotel and casino. AP

LAS VEGAS — Interested in coming to Vegas to be part of the matchup to end all matchups that Floyd Mayweather and Manny Pacquiao are selling? It’s gonna cost you.

One night next weekend at the MGM Grand, the fight venue, is running $1,600 on Friday or Saturday night. That’s more than 13 times the going rate on Sunday.

Or there’s a $180 room on the California-Nevada state line at Whiskey Pete’s hotel and casino just a 40-minute drive from the action.

Las Vegas is filling up fast ahead of the much-anticipated May 2 megafight and the city is headed for a big payday from what might be the most lucrative boxing match ever held.

Airlines are swapping smaller planes for larger ones, readying for a busy weekend and altogether busier May at McCarran International Airport.

Cabbies are asking regulators for permission to dispatch more taxis to roam the roads.

“It’s the dream card fight we haven’t seen in years,” said Don Vaccaro, CEO of Connecticut-based ticket selling site TicketNetwork, the biggest since at least Holyfield and Tyson took to the ring in 1997.

There may just be 16,800 or so seats inside the arena, but there’s been a frenzy to book all of Las Vegas’ 150,544 rooms.
A week before the fight, only 20 hotels had rooms still available, according to booking engine Vegas.com — and they aren’t coming cheap.

Even at the aging Riviera casino and hotel, the weekend before it closes for good, rates were $758 for next Friday and $798 for next Saturday for a standard room before it stopped offering rooms on the site, said Vanessa Doleshal, Vegas.com’s development manager.

Pricing has been a free for all, she said.

What would have been a busy May weekend anyway, especially with the Cinco de Mayo weekend coinciding with the Kentucky Derby and NBA and NHL playoffs, is reaching a boiling point.

“I think it will be an excellent Saturday night for us,” said Peter Feinstein, managing partner of Sapphire Gentlemen’s Club, which bills itself as the area’s largest strip club at 70,000 square feet.

It’ll be even better if he’s ultimately allowed to show the fight in the club’s 300-seat showroom, he said. It’s something he’s been told he can’t do per MGM Grand’s agreement giving it the exclusive rights to show the fight live at its 13 Las Vegas properties, although MGM has said the ban only applied to competing casino-hotels in the area.

Either way, “it’s going to be a pretty intense crowd,” Feinstein said, so he’s boosting his security by 25 percent.

For XS nightclub at Encore, it’s bound to be one of the biggest, most VIP-filled nights it’s seen. The club is tripling to 245 the number of tables that can be reserved for pricey (try $2,000 to $50,000) bottle service.

“To get a table, last minute, is impossible,” he said.

Those without fight tickets but with plenty of interest should plan ahead.

“Call a concierge. Right now. Do not wait,” said Cecilia Darr, who is — full disclosure — a concierge for The Venetian and The Palazzo.

Darr and her manager, Tim Thompson, said they are getting calls hourly from guests or would-be guests wanting to know how they can get tickets. Even with such a small number publicly available, an estimated 500 sold out in seconds Thursday, Darr said concierges would do the heavy lifting to do what they could to get a ticket in a guest’s hands.

That goes for restaurant and nightclub reservations, too, that could very well be in short supply a few days before and, at least for nightclubs, a pricier proposition with celebrities in advertised attendance.

Pacquiao fight fans have spent about $9.1 million to $11.1 million, according to the agency. And that doesn’t count anyone who came for the fight but didn’t actually sit in the MGM Arena to watch the action.

A week before the fight, Vaccaro’s TicketNetwork handled more than $1 million worth of ticket sales the first day they were made available, listing four tickets being sold by brokers for more than $100,000 each.

By show time, he expects to be the go-between for $8 million to $10 million worth of ticket sales.