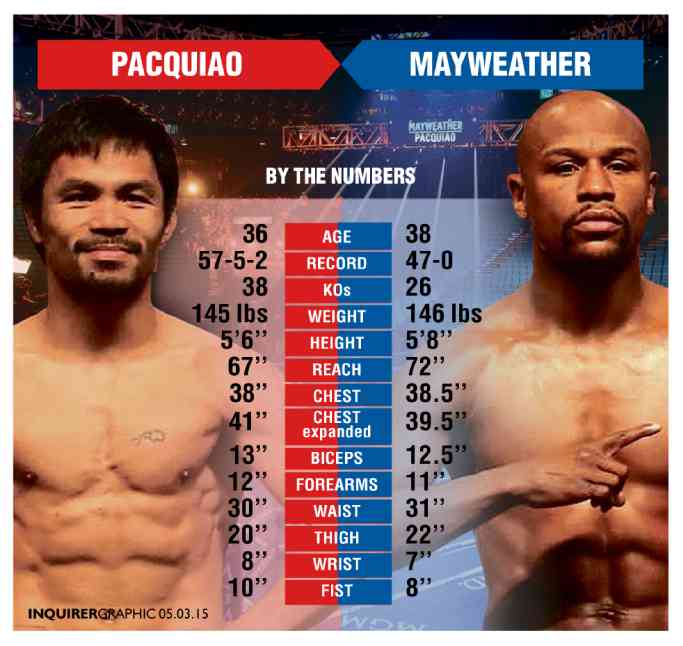 “Let this fight be the crowning glory of his career, a source of pride for his family and country,” President Benigno Aquino III said on Saturday, leading the nation in wishing Philippine boxing icon Manny Pacquiao victory in his megafight with undefeated American champion Floyd Mayweather Jr. in Las Vegas, Nevada, Sunday.

“I am very confident that Manny Pacquiao will do our countrymen proud as he has always done,” Mr. Aquino said in a statement.

“In every punch and every step during his fight with Floyd Mayweather, all Filipinos will be cheering for Manny,” he said.

The President also expressed his gratitude to Pacquiao “for being an inspiration for every Filipino.”

In a moment as ephemeral as it is rare, Pacquiao and Mayweather collide today (Saturday night in Las Vegas) at MGM Grand’s Garden Arena, more than five years since boxing’s most argued question arose: Who is the greatest fighter of this generation?

Boxing’s crowning glory will be brief—one night, one fight that will define the legacies of a fighter hoping for one last act of glory to polish his legend, another who hopes to validate a claim to greatness and a sport that is looking for a blockbuster to rejuvenate itself.

But at least boxing fans will finally get an answer to the question that has been in their minds for more than half a decade.

“The fans deserve this fight,” Pacquiao, who has turned this bout into a bizarre form of a pastoral mission, said after yesterday’s (Friday’s) weigh-in also at MGM Grand. “Whether you are fans of Mayweather or fans of Manny Pacquiao, you deserve a good fight.”

It sounded like a last-ditch effort to encourage Mayweather to be uncharacteristically aggressive on fight night—critics have feared that the five-year striptease, which will end with both fighters finally standing on opposite corners of the same ring before the opening bell, will be reduced to another clinical display of “Pretty Boy’s” defensive wizardry.

It would be a treat for purists, yes, but for fans that agonized so long and wound up paying a fortune to watch the two best fighters of their era finally square off, it would rate low on the entertainment scale.

“This is a great responsibility for me to give enjoyment to the fans,” Pacquiao (57-5-2) added. “I am confident [going into] this fight because I believe God is on my side. I can do all things through Christ.”

Mayweather, the undefeated American whose string of 47 straight wins would mean squat if he loses fight No. 48, did not give any indication how he would play this one out.

“I have dedicated 19 years of my life to boxing,” he said. “I am ready for this fight.”

Mayweather continued fleshing out the role of a subdued, low-key fighter who would not be drawn into verbal fireworks, not even as he tried to speak above a medley of jeers and boos when he was interviewed after the weigh-in. All throughout the fight preparations, Mayweather has broken character only twice.

The first was during a television interview, where he cockily positioned himself as the greatest fighter of all time, greater than the two legends historians have argued as to whom to give the honor: Muhammad Ali and Sugar Ray Robinson.

The second was during the final press conference on Wednesday, when Mayweather couldn’t hold back a snarky smile at Top Rank chief Bob Arum’s pronouncements that Pacquiao had saved the life of a compatriot facing the firing squad in a foreign land and helped a gasping US senator’s bid in a recent election.

But beyond those two instances, the normally cocky Mayweather has been a picture of calculated coolness.

Pacquiao, on the other hand, was relaxed during the weigh-in, smiling confidently, even during the traditional stare-down. The eight-division champ logged 145 pounds (65 kilograms) at the scale while Mayweather came a bit heavier as both fighters cleared the last obstacle before trading mitts to decide the rightful owner of the pound-for-pound throne.

Mayweather looked pensive throughout the proceedings, ditching the brash flamboyance and unabashed arrogance that has been his trademark.

The counterpunching artist also known as “Money” has defended his personality change, saying his cocksure behavior in the past was his means of promoting a fight.

He said that for a fight that feeds itself financially or publicity-wise, there is no need for that persona.

Arum, however, views the disparity in disposition between the two boxers in a different vein.

“I think the difference is Manny looks at fighting as something that elevated him from abject poverty,” he said. “Manny enjoys the training and he’s not tired of it. He loves it. He thrives on it. Floyd has been involved in boxing since he was 8 years old. That’s 30 years. That’s a long time. The fact that he says he’s tired of it, I believe it.

“Marvin Hagler said something that was so true: Millionaires sleep in silk pajamas and don’t like to get up and do roadwork in the morning,” he added.

But for Pacquiao’s trainer Freddie Roach, Mayweather’s demeanor is the result of a harsh, unspoken truth.

“I don’t think he likes this fight,” Roach said. “I think he might not even show up. He didn’t get to pick his opponent this time. I think he was forced to take this fight and he doesn’t like it one bit.”

Mayweather has faced accusations of cherry-picking his way to a 47-0 record. Facing Pacquiao is actually a risky proposition for the fighter who loves to take the safest routes to greatness. But the reward is as high as the risk.

A win by Mayweather will forever silence his critics, who, aside from peeling open people’s eyes to the fact that boxing officials have allowed a convicted woman abuser to milk the sport for millions, feel that validation of his self-proclaimed legendary status will have to run through that relentless and tireless volume-punching dynamo whose offense rests in that sweet spot where speed and power intersect.

Pacquiao doesn’t have as much at stake as Mayweather has in this bout. Win or lose, the fighting congressman from Sarangani will still be the sport’s only athlete to have won world titles in eight different weight classes.

But a victory by the 36-year-old Pacquiao over the artful ring craftsman will further enhance his legend. Becoming the first boxer to hand Mayweather a professional loss will send Pacquiao’s star farther and higher into the sky as he nears the end of his career.

But winning won’t certainly be easy.

Pacquiao’s strengths are his hand speed, punching power and footwork. He has the uncanny ability to punch from different angles and throw combinations six- to eight-deep.

But this blitzkrieg offense opens Pacquiao up to carelessness, as proven when he was a dodge away from knocking out Juan Manuel Marquez, the Mexican rival who floored him cold in 2012.

Even before that crushing knockout, Marquez had always bedeviled Pacquiao, throwing accurate counters and that looping right overhand that often found its mark.

And Mayweather is a more effective counterpuncher.

Tucked behind his shoulder roll, Mayweather can uncork that right even more accurately. Worse, Pacquiao may not easily sidestep the attack because dodging the shot that way opens him to the American’s left hook.