sports / Boxing
#PacMay by the numbers 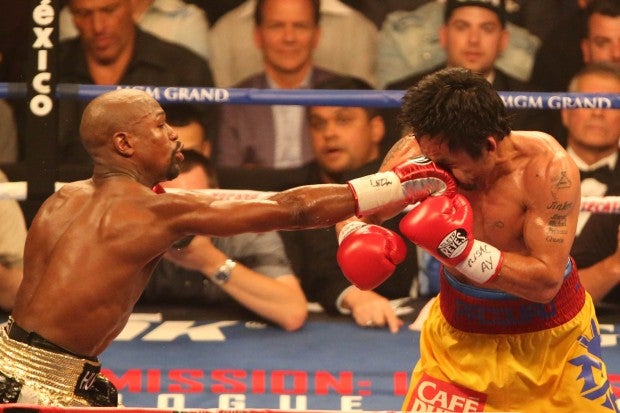 LAS VEGAS — The sellout crowd at MGM Grand Garden Arena may not agree with them but the punch statistics show a clear victory for Floyd Mayweather Jr. over Manny Pacquiao Saturday night.

The numbers also showed Mayweather–now the unified welterweight champion after collecting Pacquiao’s WBO belt to go with his WBA and WBC crowns–hitting the Filipino boxing star more power punches with 81 as compared to 63.

The pound-for-pound king was also efficient, as he connected on 48 percent of his 168 power punches.

Pacquiao, however, thought he had drawn Mayweather’s first loss in 48 professional fights.

“I thought I caught him many times. I was never hurt. I was very surprised at the scores. I hit him more times than he hit me. I thought I won,” Pacquiao said in disbelief.

“I thought we pulled it out. We pressed the action. We may have been flatfooted too many times but I thought we won the fight,” said Freddie Roach, Pacquiao’s  Hall of Fame trainer.

The 38-year-old Mayweather kept Pacquiao at a distance with his effective jabbing. The American boxer landed 67 out of 267 attempts. The Filipino, in contrast, connected on just 18 jabs out of 193.

Pacquiao was the aggressive fighter as expected and, at times, appeared a bit frustrated as he chased the slippery Mayweather around the ring through 12 rounds.

“I knew he was going to push it and win some rounds. He had some moments in the fight but I kept him on the outside, I was a smart fighter,” said Mayweather, who added that he planned on hanging up his gloves after his last fight in September.

The boos rained down on Mayweather throughout the historic bout. Mayweather, though, soaked it all in and eventually had the final, say as he walked out undefeated and $180-million richer.