Manny Pacquiao not only faced an undefeated defensive wizard in Floyd Mayweather Jr. during “the fight of the century,” he was also fighting himself.

During the post-match press-conference Pacquiao said he cannot use his right hand at 100 percent after injuring his right shoulder during training two-and-a-half weeks ago.

He said an MRI scan confirmed the injury. 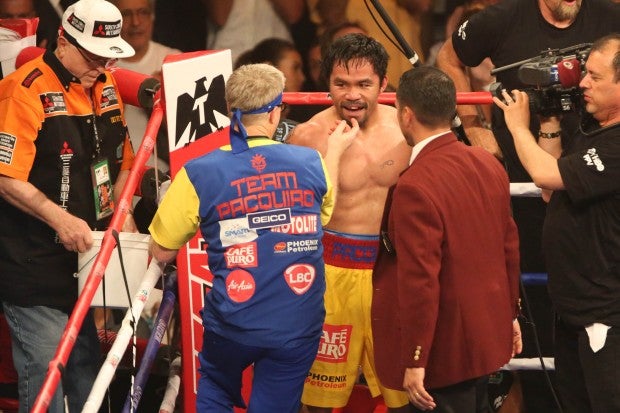 “I cannot use a lot of my right hand, the fight is still good,” Pacquiao said Sunday (Manila time). “The thing is, what we want to do we can’t do because of my shoulder.”

Even with his injured shoulder, Pacquiao gave credit to the new WBO, WBA, WBC Welterweight Champion.

“I’ve spoken with Mayweather, he’s a good boxer, credit to him, he won tonight.”

Just before leaving the podium to allow Mayweather to take the spotlight, Pacman and Money had a sport gesture when the American approached the sitting Filipino and hugged it out.

Mayweather said he also had injuries going into the fight but he would gladly congratulate Pacquiao if the eight-division World Champion won their fight.

“I had injuries going to this fight, but if he came out victorious, I got to show respect that he is the better man and that he beat me,” Mayweather said.

After the match, both fighters have a newfound respect for each other.

“Manny Pacquiao is still a champion, he still has a lot left,” Mayweather said. “I was the better man tonight.”