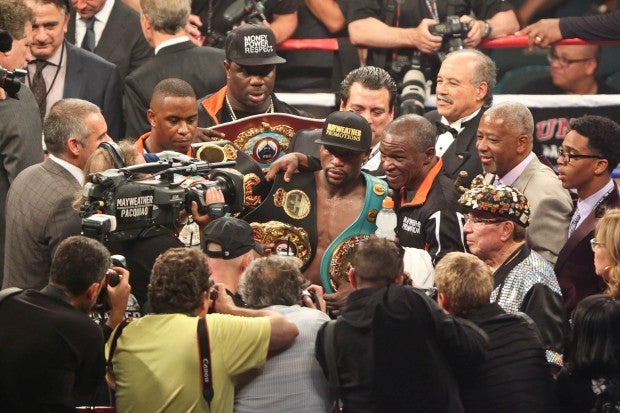 Floyd Mayweather poses for the photographers after winning his fight with Manny Pacquiao by unanimous decision. PHOTO BY REM ZAMORA/INQUIRER/See more at FRAME

LAS VEGAS —A rematch? Don’t bet on it, at least not yet.

Newly-minted unified welterweight champion Floyd Mayweather Jr. would rather let the biggest win of his career sink in before a possible second meeting with Manny Pacquiao, whom he clearly beat by unanimous decision Saturday, would even cross his mind.

“All I want to do right now is to just go home and rest,” said Mayweather during the post-fight presser.

Mayweather has one more fight left on his contract with Showtime and he plans to step into the ring one last time in September before calling it a career.

Though, another fight with Pacquiao would be the practical choice in financial terms, it is unlikely to happen as far as his father and head trainer Floyd Sr. is concerned.

Floyd Sr., though, still thinks his son should push through with his farewell fight in September but he should play it safe.

“I’m gonna tell you what I think he should do in September being that he had fought pretty much all of the guys around him, the hard-hitters the Alvarez’s, Cotto, Maidana, he fought all of them. My son should take this contract and fight an easy fight. He don’t need those tough fights.”

“He doesn’t have anything left to prove. There’s no one left for him to fight.”

READ: Mayweather may relinquish all titles ‘to give other fighters a chance’

And a fight against British boxer Amir Khan is possible. A bout which Floyd Sr. thinks will be a “good fight” and an “easier” one for his son.

When Floyd Jr., himself, was asked about a rematch, “all I wanna do now is go home and rest.”

“That would be a good fight but my son can beat him too.”

But the pound-for-pound king made it clear that duplicating the former heavyweight champion’s feat and following the footsteps to become like the legends of the sport in Muhammad Ali, Sugar Ray Leonard and Sugar Ray Robinson is also not among his plans.

He also doesn’t want to think about anything other than his latest cause for celebration.

“Can I please just enjoy this victory for a moment?”