Round by round as seen on PPV | Inquirer Sports

Round by round as seen on PPV HE COULD HAVE DANCED ALL NIGHT Manny Pacquiao bores in against smooth dancer Floyd Mayweather Jr. during their catch-me-if-you-can encounter at the MGM Grand Garden Arena in Las Vegas, Nevada. AFP

Mayweather is dictating the pace early and controlling the distance. Pacquiao can’t get to him. Mayweather connects with a couple of counter rights. No damage. Clear Mayweather round.

Mayweather is moving well. Pacquiao, still pressing the action, drills Mayweather with a powerful left and flurries on the ropes. Mayweather covers up like a turtle, maybe hurt a bit. Good round for Pacquiao. 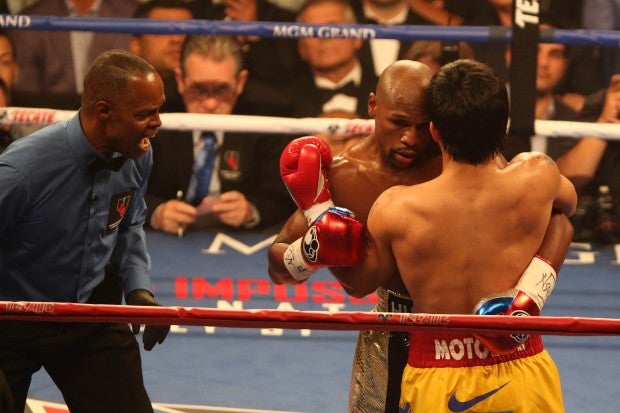 Right hands by Mayweather are connecting. Pacquiao responds with a flurry. Nice body shot by Pacquiao. Mayweather is nailed with another left straight, Pacquiao’s most effective punch, so far. Pacquiao round.

Pacquiao is caught with a left hook on the way in. Mayweather studies Pacquiao’s feints well, moves away before Pacquiao can move in. Mayweather is still dictating the fight. Another round in the bank for him.

Pacquiao is landing. Good sign. Pacquiao just misses with a looping left. Mayweather connects with a right. Pacquiao clearly has a plan to neutralize the counters. Mayweather, not allowing him, times his punches perfectly. Mayweather lines Pacquiao up for the right hand. Mayweather round.

Pacquiao connects with a left. Mayweather tags him with a counter right after Pacquiao unleashes a combo. Mayweather is making Pacquiao miss a lot. Pacquiao is not gun-shy but needs to find Mayweather more often. Pacquiao round, but could have been easily Mayweather’s.

Mayweather starts out aggressively. Mayweather tags Pacquiao with right hands. Mayweather firmly in control. Masterful boxing by Mayweather. Another round for him.

Pacquiao needs a KO. Mayweather fires jabs, keeping Pacquiao at bay with movement and sharp counters. Pacquiao is still trying. But nothing much for him in that flurry. Final seconds. Mayweather dances away, raises his hand in a seemingly rather easy victory.

Pacquiao does not want to make alibis despite shoulder pain