Pacquiao: Mayweather is good, he won the fight

LAS VEGAS—Manny Pacquiao’s initial reaction was he had been robbed of victory against Floyd Mayweather Jr.

But having considered the outcome, Pacquiao had some reservations about what really transpired in their colossal battle for pride, glory and money Saturday night.

“I did my best …” said Pacquiao, who had changed into a white long-sleeved shirt and black pants during the postfight conference. “Anyway I’d like to thank the people who came to see the fight. I don’t want to make alibis. It was a good 12 rounds. I fought a good fight.”

To be fair to Mayweather, Pacquiao, who said he was bothered by a shoulder injury since the third round, had to review the tape of the fight “to see what really happened.”

With one good hand, Pacquiao became an easier, more readable target for Mayweather, who sneaked in punches to prevent the Filipino ring icon from launching a full-blown attack starting in the seventh round.

From the second to the fourth round, Pacquiao had the better of Mayweather, who was still trying to figure him out.

Once Mayweather, touted as one of the sport’s best counterpunchers and tacticians, found loopholes in Pacquiao’s defense, however, the fight took a downturn for the eight-division world champion. 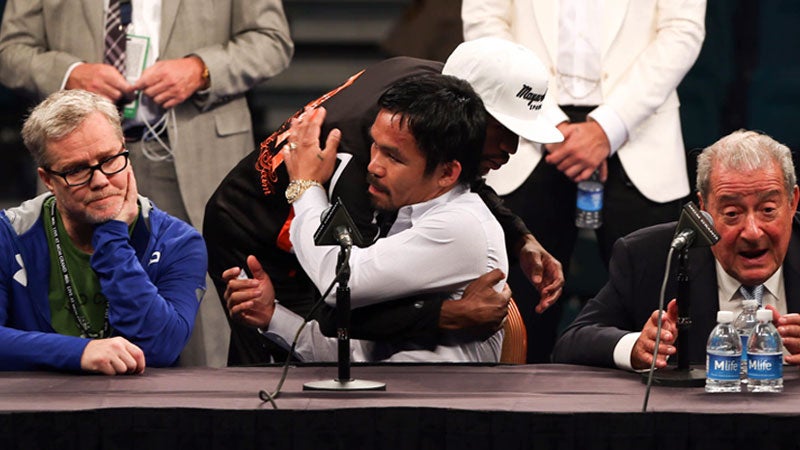 In fact, Mayweather swept the last six rounds, according to the three judges.

“I thought I caught him many times. I was never hurt. I was very surprised by the scores,” said Pacquiao, who later made a candid admission that he had not really been well in his seven-week training camp in Hollywood.

“You know, this training camp I thought we’re planning to postpone as I could not use my right hand,” said Pacquiao. “We planned to seek commission exemption (painkillers) for the numbness in my right shoulder.”

While he was able to control the pain, Pacquiao admitted that two weeks before the fight his shoulder didn’t really get better. “I realized, something was wrong.”

According to Pacquiao, he had an MRI (magnetic resonance imaging) three weeks before the fight, and learned that there was a tear in his right shoulder.

Despite taking his sixth loss against 57 wins [38 by knockout] and two draws, Pacquiao wasn’t in a foul mood.

“I’m very happy with the result,” he said. “I fought a good fight. I cannot use my right hand a lot, but it’s still good. It’s still there.”

Pacquiao then gave Mayweather credit for the fight, witnessed by a packed crowd of 16,507 at MGM Grand Garden Arena.

On the prodding of the media, however, Pacquiao was forced to admit that his right shoulder hurt when he threw a lot of punches and combinations.

“I didn’t complain as it’s part of the game. I didn’t want to make alibis.”