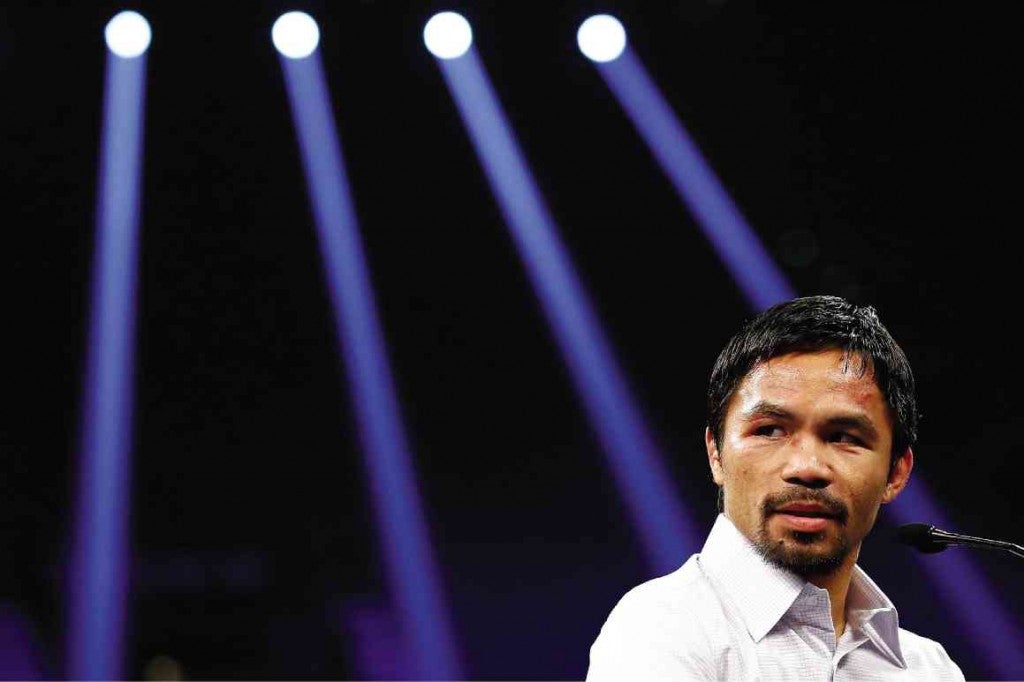 LAS VEGAS—Team Pacquiao has accused the Nevada State Athletic Commission (NSAC) and Floyd Mayweather Jr. of conspiring to ensure the victory of the unbeaten American in their celebrated fight at the MGM Grand Garden Arena.

The accusation came on Sunday (Monday in Manila), a day after Mayweather scored a unanimous decision over Pacquiao in a 12-round bout where the Filipino supposedly fought for 10 rounds with an injured right shoulder.

A source in the Pacquiao camp said a series of incidents before the fight convinced the Filipino ring idol that the NSAC was favoring Mayweather in the fight.

The source cited the refusal of the commission to grant Pacquiao’s request to have pain-killers injected into his injured right shoulder while allowing Mayweather to have painkiller shots on his injured fist.

“The NSAC was not fair. Pacquiao was fighting in hostile territory,” said the source, who asked not to be named for lack of authority to speak for the Filipino ring idol.

‘Bad side of boxing’

Still, the source said, Pacquiao went ahead with the fight “for the sake of the fans and to expose the bad side of boxing in Las Vegas.”

Mayweather, a native of Grand Rapids, Michigan, now lives in Las Vegas, where he maintains the Mayweather gym. The MGM Grand, which hosted the megabuck fight, calls itself Home of the Champion Mayweather.

Just so Mayweather would stop dodging him, Pacquiao had said he agreed to the lopsided terms imposed by Mayweather in their fight contract. These terms included a 60-40 sharing of the revenue, the right of Mayweather Promotions to handle the fight, and the mandatory blood testing.

That Mayweather was getting special treatment in Las Vegas was the reason he did not want to fight at the Cowboy Stadium in Dallas, Texas, which Pacquiao had proposed during the negotiations for what had been billed the “Fight of the Century.”

“Mayweather, with all his money, controls everything in Las Vegas,” the source said.

Pacquiao’s trainer, Freddie Roach, revealed that the US Anti-Doping Agency (Usada) had taken blood samples of the Filipino fighter a total of 13 times since Pacquiao agreed to the drug-testing protocols according to the conditions imposed by Mayweather in their fight contract.

The 13th testing was made on Friday, the day of the official weigh-in and one day before the fight.

Roach said the Usada would not reveal how many times Mayweather was similarly tested.

In the days leading to the megabuck fight, the commission and the Mayweather camp were “playing mind games” with Pacquiao, the source complained. On several occasions, the NSAC entertained complaints by Mayweather about Pacquiao’s gloves, his hand tapes and the groin guard.

“They were trying to get into Manny’s mind,” he said.

In Sunday’s hotel interview, Pacquiao said he did not want to make a big fuss about his shoulder injury, which he sustained during sparring a couple of weeks before the fight.

[Interviewed Monday on GMA 7 network, Pacquiao said he originally injured the shoulder while jet skiing off General Santos City in 2009.]

In Sunday’s interview, he said Team Pacquiao had thought of having the fight postponed, but it was agreed that he would let the injury heal and go ahead with the fight because he did not want to disappoint the fans.

Pacquiao said he was hoping the injury would heal by fight time and that he would just take the painkillers before the fight.

The Nevada commission, which regulates professional sports in the state, would have none of it.

In fact, Aguilar said, the Pacquiao camp did not reveal the injury in the medical questionnaire filed by the Filipino’s handlers during the weigh-in on Friday. It was the deadline for revealing such injuries.

In a television interview, Pacquiao said it was impossible for the commission not to know.

While they tried to keep the injury from the public, it leaked from the gym such that even Mayweather apparently knew of the injury because he kept pulling at his right arm during the fight.

With Saturday night’s loss, the sixth in his career, Pacquiao has now lost three of his last four fights in Las Vegas.

In a six-month period in 2012, he suffered two losses in the Sin City. He lost a controversial split decision to Timothy Bradley in a fight that he clearly won on June 9 and on Dec. 8, he was knocked out by Juan Manuel Marquez.

READ: Pacquiao: Mayweather is good, he won the fight

The two losses cost Pacquiao a big leverage in the five-year tug-of-war that culminated in Saturday night’s fight.

Mayweather, on the other hand, had benefited from several controversial decisions in Las Vegas.

A year ago, he scored a disputed 12-round majority decision over Marcos Maidana in a fight which saw him hit the canvas only for the referee to rule it a slip.

In 2007, Mayweather defeated Oscar De La Hoya in a 12-round split decision that even his own father, Floyd Sr., thought he lost.

In Manila, boxing analyst and lawyer Ed Tolentino told ANC’s Karen Davila that Pacquiao should have canceled the fight when he knew he was not fully fit to fight the best pound-for-pound boxer in the world.

Tolentino said that Pacquiao should have canceled the fight after knowing he had a “bum shoulder” because he owed it to viewers to fight 100 percent.

Holyfield: Pacquiao should have won vs Mayweather