Business back to normal at Wild Card neighborhood 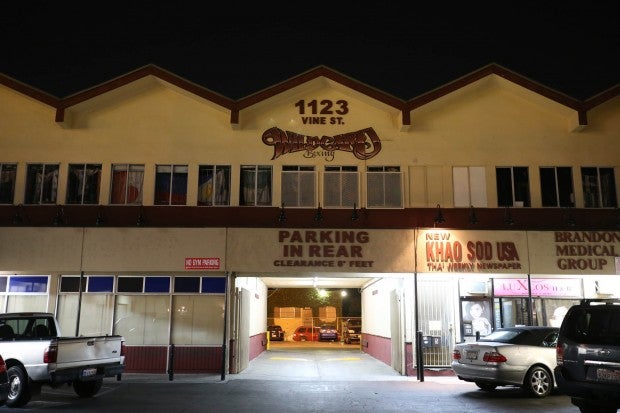 BACK TO NORMAL. The Wild Card Boxing gym goes back to normalcy without supporters and media waiting outside days after Manny Pacquiao’s big fight with Floyd Mayweather Jr. PHOTO BY REM ZAMORA/INQUIRER/See more at FRAME

HOLLYWOOD—For anyone who has ever dropped by the strip mall on Vine Street that houses Wild Card gym to cover a Manny Pacquiao training camp or visit the Filipino ring icon and wait for a post-workout glimpse of him, Monday afternoon would have been a page torn off surrealism.

It was the perfect scene to resolve the contradiction of dream and reality: The place was actually quiet; the parked cars, abandoned by their owners to attend to whatever business they had in the surrounding shops, gave the place an eerie, post-apocalyptic feel.

And yet, this is as real as it gets here.

“It’s a lot like this most days,” said Rob Peters, hardworking security guy of probably the world’s most famous boxing gym. “Of course, the excitement is always high when Manny’s here. We will have a lot of amateurs in the afternoon, but the number really drives up when Manny starts training.”

There were no hangers-on today. No overzealous fans Peters had to chase off. The shops finally got their parking spaces back without having to resort to calling the police.

There were no Christian groups singing gospel songs, no people buying cheap $3 posters hoping to get it inked by one of the most loved boxers of all time.

READ: At Wild Card, there’s always someone waiting for Pacquiao

Perhaps the place where activity dried up the most was Nat’s Thai Restaurant, which is tucked between a nail spa and a convenience store. Located adjacent Wild Card, the restaurant’s claim to fame is being Pacquiao’s unofficial lunchroom.

Two days after Pacquiao dropped a decision—a result that is now a controversy-in-the-making—to Floyd Mayweather Jr., the usual business ran its course inside the restaurant.

“Today was busy for lunch hour,” said Tasanee Sridakun, the 47-year-old who is half of the couple that run the tiny food business that experiences a spike in revenue when Pacquiao is training for a fight.

Sridakun, who everyone fondly calls Tina, has adorned the place with photos of Pacquiao and other boxers who have trained at Wild Card.

She does everything inside the restaurant. She cooks, buys produce, serves tables and collects orders. Her husband, Natthawat Yuyatmak, also cooks and almost wordlessly mans the cash register.

Sridakun has become an avid Manny Pacquiao fan since she first met the boxer in 2005, the Erik Morales phase of the Pacman’s career.

“Before, he come here and there’s not too many people,” she said, her accent still thickly and endearingly Thai despite living in America since 1998.

Cordon off the place

Just as people flock to the strip mall to catch a glimpse of Pacquiao, people slide into Nat’s on the pretense of purchasing a meal just to dine a few meters away from the people’s champ.

It reached a point where Tina and her husband had to cordon off the place to give Pacquiao some privacy. Lately, that hasn’t been enough—there are about seven or eight tables inside the restaurant—so the couple close the shop at 4 p.m., about the time Pacquiao winds up a training session at Wild Card.

They reopen for dinner customers at 7 p.m. Pacquiao no longer dines there with predictable regularity. Still, the place is closed down for members of Team Pacquiao.

Sometimes, Pacquiao’s mother Dionisia, wife Jinkee and some close friends also hang out inside the restaurant.

Sridakun has even included a Filipino fare, beef tapa, in her menu.

“Manny likes beef,” she said. “So I put beef tapa. Manny loves to eat that.”

After a fight, though, the craziness evaporates and Nat’s settles into a familiar spot of normality. There are a few traces left of Pacquiao’s training camp.

Sometimes, team members still show up (an aide brought along his family for a late lunch, charging the feast to the still-running Team Pacquiao tab). On this particular Monday afternoon, the most noticeable residue of Pacquiao’s presence is Sridakun’s hoarse voice.

Was that a fight?

“I lose my voice always screaming ‘Manny! Manny!” she said. It is one of the perks the owners of the restaurant get: Comp tickets to Pacquiao fights. And in this particular bout, the tickets weren’t cheap. The fight, though, may have been.

“A lot of people who come here, they were so sad,” she said. “Me, I feel, oh, did I watch a fight? A romantic movie? Why he hug Manny so much? Why he love Manny so much?”

“A lot of people come here, they’re so quiet today,” added Sridakun. “They talk a little about the fight and they ask, was that a professional fight?”

The object of Sridakun’s and her customers’ ridicule is, of course, Mayweather. Like true Pacquiao fans, neither Sridakun nor her customers believe that Mayweather won that fight.

“Maybe he is champion of the world in running,” she said, laughing.

But slowly, as the fight drifts into the realm of forgotten memories, there will be little Pacquiao talk except for the inevitable newcomer who drops by because “this is where Pacquiao eats,” she said.

But there will still be boxing talk. Freddie Roach and Marie Spivey, who run Wild Card, send gym regulars to Nat’s when they ask for food suggestions. On Monday, Spivey ordered food to go during lunch break.

“They are regular customers, the people Freddie and Marie send,” said Sridakun.

And sometimes people from Paramount Pictures, which is located on a huge lot on Melrose, which runs perpendicular to Vine, will drop by.

But it is Pacquiao that Sridakun waits for the most. Never mind if it is mostly his posse she gets to serve and talk with. When they return for the start of training camp, she shrieks and embraces them hard and asks them how life has been.

“Manny will fight maybe one or two more times,” she said, her eyes turning wistful. “He’s strong like when he was young. He can fight until 40, maybe 41.”

“I will Facebook him or text message maybe,” she said, her eyes going blank. It is a second or two before she snaps back into the conversation and flashes an optimistic smile. “Maybe I will visit Philippines, visit Manny.”

If the Pacquiao training camp closes one final time, “we’ll miss him,” Sridakun said. “We’ll miss all of them.”