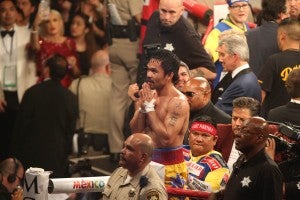 Senator Joseph Victor “JV” Ejercito has filed a resolution, commending Saranggani Representative Manny Pacquiao for his “exceptional performance” during “the Fight of the Century” against Floyd Mayweather Jr. at the MGM Grand Arena in Las Vegas, Nevada last Sunday.

“The Filipino people once again witnessed our “Pambansang Kamao” Manny Pacquiao display his boxing prowess against a seemingly formidable opponent in the person of undefeated Floyd Mayweather Jr. last May 3, 2015. Although PacMan lost the bout, he has won the hearts of us all—a true people’s champ,” Ejercito said in a statement on Wednesday.

He said Pacquiao unrelentingly pursued Mayweather but the latter chose to run and dance around to the people’s disappointment.

“It was very clear that Manny came to win and Mayweather came not to lose,” the senator said.

“Despite his loss, Manny Pacquiao was able to gain the respect of the international community, considering him as the best boxer in the world, calling him the winner of the people’s heart for his greatness inside and outside the ring, and for his exceptional talent and heart for the sport of boxing,” he further said.

Ejercito said Pacquiao’s contributions to the sport of boxing will forever leave an indelible mark not only in the hearts and minds of the Filipino People but of the whole world regarding him as one of the best fighters in the world of sports.”

“His examples transcend his persona inside the ring, helping those in need, being an advocate of various issues and serving his constituent as a lawmaker. Cong. Emmanuel Pacquiao deserves our thanks and gratitude. He is a true champion of the people,” said the senator.

“Boxing owes so much to Manny for bringing excitement and fire for the past 14 years! Each time he puts on those gloves and steps on the ring, he carries his whole nation on his shoulders. As we look back on all the great fights that Manny has given us, we can only smile as we reminisce the greatness of this dynamo from the Philippines. We will never see another Manny Pacquiao in this lifetime.”

The senator said Pacquiao’s struggles in life, not just in boxing, also showed the capacity of the human spirit’s to overcome all adversity that hinders a person’s want to better himself. The result of Pacquiao’s last fight, he said, did not eclipse this lesson.

“Coming from humble beginnings, he persevered and triumphed. His achievements in boxing set his loved ones into a secured life while uniting the country behind his endeavors, giving each one of us another reason to be proud to be Filipinos,” Ejercito added.

Your subscription could not be saved. Please try again.
Your subscription has been successful.
Read Next
Pacquiao sued over nondisclosure of shoulder injury
EDITORS' PICK
Omega Speedmaster super racing: Tiny device massive change
vivo Philippines offers a free bouquet of flowers and a premium necklace perfect for Valentine’s Day
Fuel price rollback expected on Feb 7
Makabayan bloc blasts bid to expand US access to more military bases in PH
Philippine-United States alliance ‘rock solid’ — DFA
House energy committee chair Arroyo bats for cheap electricity
MOST READ
Vice Ganda gets called out for ‘unfair treatment’ of ‘It’s Showtime’ co-host Karylle
Fuel price rollback expected on Feb 7
Kris Aquino gets ‘renewed confidence’ after consultation with new doctor: ‘I have a strong chance of getting better’
Pokwang tells self amid revelations on past relationship: ‘Bangon, nanay ka’
Don't miss out on the latest news and information.