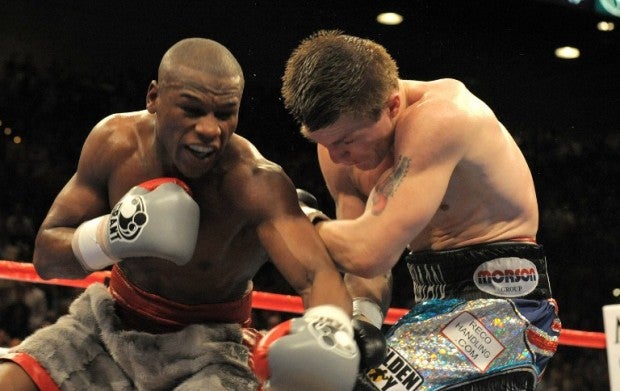 Just because he’s the boxing’s best and richest fighter, doesn’t mean he’s the most respected.

Hatton told The Sun how Mayweather disrespected the sport of boxing with his off-ring antics.

“Floyd has his way and I have mine, but there’s a line between selling tickets and disrespecting the sport,” Hatton said. “What’s the point of being the world’s best fighter if everyone thinks you’re a d***head?”

Mayweather defeated Manny Pacquiao in their much ballyhooed fight to unify the WBO, WBC, and WBA Welterweight titles but the Pacman got the love of the Las Vegas crowd while “Money” got boos from his supposed hometown fans.

READ: Mayweather says he gets more love overseas than in America

Hatton recalled the events leading up to their 2007  superfight when Mayweather called him profanities and even using the Manchester derby to get to his head.

The undefeated American, meanwhile, has been wearing Philippine-inspired gear during training camp and after his fight against Pacquiao.

Read Next
Sonny Angara hopes Pacquiao visits Senate soon
EDITORS' PICK
Atienza tells Bongbong: You’re not a millennial to be ignorant of martial law atrocities
153 protests filed vs China actions in PH waters in 2021 — DFA
Leaked: A 60x Zoom and all-new Helio G96 mean a complete overhaul for TECNO Mobile’s new CAMON 18 series
Next level mobile photography within reach with vivo X70 co-engineered with ZEISS
Duterte blasts rights groups for overlooking the ‘other side’ of drug war
Delivering delight against all odds
MOST READ
Robredo to supporters: Be calm, gentle and do good deeds
Duterte inaugurates P684-M bypass road project in Quezon
Matibag calls Senate budget hearing ‘political,’ gets kicked out
Cristine Reyes opens up on her trauma from abuse, painful childhood
Don't miss out on the latest news and information.