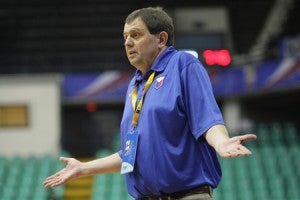 MANILA, Philippines—Coach Rajko Toroman may failed to pull off a miracle in the Asian championship but he has earned more respect from one of his peers after elevating Philippine basketball to new heights.

From 53rd in the world, the Philippine five moved eight notches up the Fiba men’s rankings to 45th after Smart Gilas Pilipinas finished fourth in the 26th Fiba Asia Championship held recently in Wuhan, China.

It was the third biggest jump from among the five zones—Europe, Americas, Africa, Asia and Oceania—of the sport’s world governing body after Macedonia (who rose to 33rd from 47th) and Britain (now ranked 43rd from 56th).

Another international coach, who beat Toroman in the semifinals, acknowledged Toroman’s great effort.

“His team (Smart Gilas) was very inexperienced,’’ said Jordan coach Tab Baldwin. “He’s (Toroman) the big reason, maybe the biggest reason they got as far as they did.”

“My respect for him and for what he has done for that team over the last few years. It’s remarkable,’’ added Baldwin, whose Jordanian squad gave China a big scare in the finals before the host nation escaped with a one-point win.

The fourth-place finish was a breakthrough for the Filipinos in the Asian championship. The last time the country reached the semifinals was in 1987 with a team handled by coach Joe Lipa.

“What a great tournament for the Philippines,” said Baldwin, who also steered New Zealand to the semifinals of the 2002 Fiba World Championship. “Coach Toroman is one of the most experienced coaches in this tournament, one of the greatest guys in the tournament.”

Toroman, who led Iran to the 2008 Beijing Olympics after winning the 2007 Asian championship, will end his contract with Smart Gilas Thursday.

“I don’t worry about his career,” said Baldwin. “He’s beloved in Europe. He is wanted in Europe and Asia. I’d like to see him get everything he wants in his career because he deserves it.”

Meanwhile, Antipolo first district congressman Robbie Puno has filed a resolution in the House of Representatives commending the performance of Smart Gilas in the London Olympic qualifier.

“This is the strongest Fiba Asia Championship finish for the Philippine team in the last 24 years,” said Puno. “But we should not stop short of our Olympic dream. The dream lives on.”