I just want to tell the truth, says Pacquiao 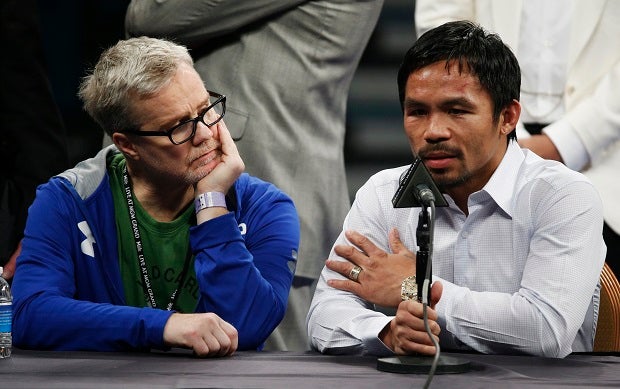 FILE – In this May 2, 2015 photo, trainer Freddie Roach, left, listens as Manny Pacquiao answers questions during a press conference following his welterweight title fight against Floyd Mayweather Jr. in Las Vegas. Pacquiao could face disciplinary action from Nevada boxing officials for failing to disclose a shoulder injury before the fight. Nevada Athletic Commission Chairman Francisco Aguilar said that the state attorney generals office will look at why Pacquiao checked no a day before the fight on a commission questionnaire asking if he had a shoulder injury. (AP Photo/John Locher)

GENERAL SANTOS CITY—“I’m not a sore loser. I just wanna tell the truth so the people will know.”

This was what eight-division boxing champ and Sarangani Rep. Manny Pacquiao said when asked about his reaction to Floyd Mayweather’s statement that he was not interested in a rematch with the Filipino boxer “because he’s a sore loser and he’s a coward.”

The interview was recorded for Showtime on Tuesday and will air Saturday night in the US after the replay of the Pacquiao-Mayweather fight but some of the American boxer’s quotes were released ahead of time.

Mayweather also said Pacquiao was “absolutely not” hampered by his shoulder injury.

But Pacquiao said he “fought in an uneven playing field where my opponent was in control of everything, inside and outside the ring.”

Pacquiao claimed the fight gave him a chance to know the real Mayweather.

“He’s an astute fighter who doesn’t have the so-called sense of fair play,” Pacquiao said.

The Pinoy ring icon emphasized he had accepted his defeat and he did not harbor rancor against the judges.

“I respect the decision of the judges and I accept my defeat,” he said.

Pacquiao also said he was not thinking of a rematch with Mayweather.

“Right now, my focus is to fully recover from my right shoulder injury and on my job as a lawmaker,” he said.

Speaking at a mall here Friday, Pacquiao bared he was moved to tears after watching the footage of the fight.

“When I went back to my hotel, I reviewed the fight and I saw the people’s reactions; that’s when I cried because of the support of the people before and after my fight,” he said.

He also apologized to his fans and the Filipino people in general for his loss.

“I was disappointed because I failed to give you joy,” he added.  Aquiles Zonio and Jeoffrey Maitem, Inquirer Mindanao