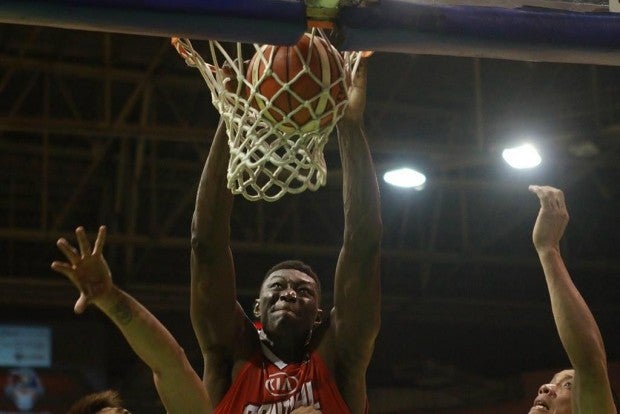 And if he lives by that mantra, then maybe Hamady N’Diaye is bound for one.

The Senegalese giant showed how intimidating he can be on the defensive end after he towered for Kia in its 84-76 double-overtime win over Blackwater.

He might have posted a double-double of 16 markers and 23 rebounds, but the biggest highlight of his statline is the nine blocks.

And N’Diaye feels he should’ve been credited for more.

A tenacious defender in every league he played at, N’Diaye admits that he relishes the chance to reject shots.

“That’s what I do best. The best thing I do is block shots. To get nine blocks is amazing. There’s no better joy for me than to know that my opponent is not scoring on me. Shot blocking is the icing on the cake.”

With Kia getting a share of the second spot with its 3-1 slate, the 7-footer downplayed the Carnival’s ascent to the top of the standings and said that there’s no secret to their success except for teamwork.

“The guys on my team are really working with me no matter what’s going on. They are focusing on trying to make me feel comfortable offensively and defensively. And that’s what I’m here to do, to just try to complement them,” he said. CC