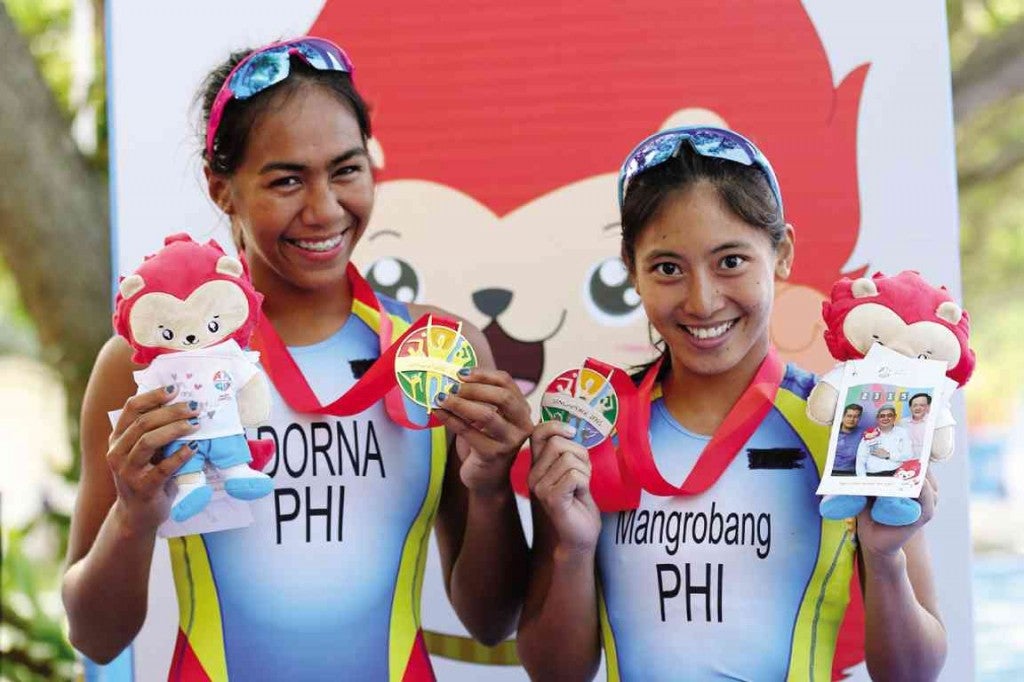 Lighting up the faces of the Philippines’ Claire Adorna and Kim Mangrobang are their smiles and their gold and silver medals, respectively, in the women’s triathlon on Saturday. RAFFY LERMA

SINGAPORE—Triathlete Claire Adorna warmly lived up to the hype and delivered on Saturday, giving the Philippines a feel-good moment with its first gold medal in the 28th Southeast Asian Games.

Although limping home due to a bad ankle, the sports science major from the University of the Philippines Diliman ruled women’s triathlon in two hours, 13 minutes and eight seconds to lift the spirits of a nation hungry for victories after a series of near hits in fencing and table tennis the last few days.

Teammate Kim Mangrobang checked in a minute and 18 seconds later as the Filipinos completed a 1-2 conquest of the swim-bike-run test of endurance.

Adorna’s victory in super humid conditions at the East Coast Park here more than made up for a string of bronze medal performances in canoe-kayak, shooting and traditional boat race.

Shooter Jason Valdez tallied a third-best 181 points in the men’s 10-meter air rifle finals won by a pair of Thais at the remote Safra Yishun indoor shooting hall while the Philippine women’s team in the six-crew 200-meter dragon boat event also reached the podium behind Thailand and Myanmar.

On the same channel, where the iconic Marina Bay Sands hotel stands, teenagers Hermie Macaranas and Ojay Fuentes accounted for another couple of bronzes in the solo and tandem men’s canoeing 1000-m events.

Macaranas later joined forces with 16-year-old Fuentes to snatch the bronze in the tandem with a time of 3:58.37, jacking up the overall harvest of Team Philippines with one gold, four silver and five bronze medals for sixth overall on the medal board.

Singapore, with earlier victories in table tennis and fencing, added more golds in canoeing, shooting and wushu to pull away in the overall race with a 13-6-12 gold-silver-bronze collection.

More promising developments came on other fronts as the boxers, cue artists, tennis players and the rugby seven and softball teams opened their respective campaigns impressively.

Treat Huey, Francis Casey Alcantara, Jeson Patrombon and Ruben Gonzales blanked Cambodia, 3-0, in the quarterfinal of the men’s team tie at the Kallang Tennis Center, assuring the Filipinos a bronze.

Gabuco, 28, secured a 3-0 triumph over Indonesia’s Aldriani Sugoro in the quarterfinals of the light flyweight division while Magno, bronze medalist in the 2013 edition, was in total control in her flyweight clash against another Indonesian, Novita Sinadia, 3-0.

Fifteen-year-old Chezka Centeno and the pair of Carlo Biado and Warren Kiamco easily hurdled their first-round opponents in 9-ball pool.

Two-time world champion Rubilen Amit drew a bye to the quarters where she will face either Fathrah Masum of Indonesia or Waratthanun of Thailand.

The Blu Girls sent a chilling message to the opposition after destroying Indonesia, 6-0, in women’s softball at the Kallang Softball Field before the Philippine Volcanoes unleashed their full strength with lopsided victories over Thailand and Singapore.