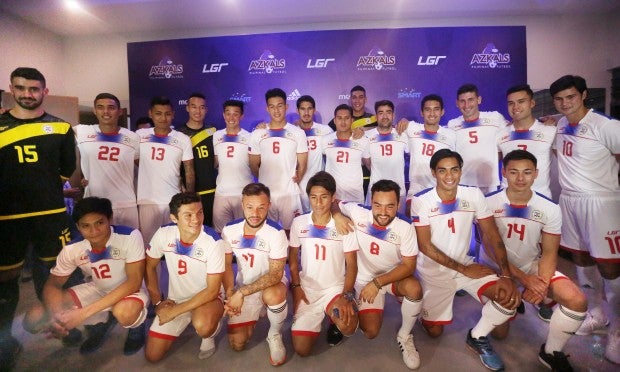 Look at the past as an inspiration, and move forward to once again uplift a nation.

That is the thrust of Philippine Azkals as they bein the exciting journey to the 2018 FIFA World Cup starting on Thursday against Bahrain in the team’s first match in the Asian qualifiers.

Recounting the success of the past years— starting in 2010 when the Azkals’ triumph in the AFF Suzuki Cup triggered the football renaissance in the country up to the team’s valiant effort in the 2014 World Cup Asian qualifiers where it fell to Kuwait in the second round—the team eyes to rekindle those sweet memories and hopefully achieve far greater goals this time out.

“That’s five years ago. We need to move forward,” said goalkeeper Neil Etheridge. “There have been a lot of changes and we don’t want to keep on going back to 2010. We want to move forward to 2016.”

Parading probably the strongest team to date, Azkals team manager Dan Palami is just elated with the level of talent the team have got.

“I’m thankful that these players are available. They made a commitment to play for the Philippines. It wasn’t easy to convince all of them to be part of the team, but I’m quite confident that with what we have, we’ll be able to represent our country proudly,” he said.

“I’m happy to see such talented players on the pitch, hopefully giving other teams a hard time and I’m confident that we’ll be pulling off some surprises,” added Palami.

The godfather of Philippine football has also never ceased to remind the players their responsibility once they don that nation’s colors.

“Boss Dan tells us that we represent a nation of 107 million people. We carry the hopes of those 107 million people in our backs and that’s our responsibility,” said team captain Rob Gier. “Everyone should be on point and ready to go on June 11.”

And everyone is just positive with what the team can accomplish.

“We got a good bunch of players,” said Phil Younghusband. “When we’re together, you see the bond. Everyone gives something unique to the squad and hopefully, it shows off on the pitch.”

“We have a team that have new faces. I think there’s a lot of Filipinos out there who are ready to play for the country, but this time, I’m happy with the players that we have,” said Palami. “We’re going to give the other teams a difficult time.” CFC

Read Next
Things learned from Barcelona’s Champions League win
EDITORS' PICK
Climate Change Commission and Nestlé PH to discover sustainability-focused solutions
Legarda emphasizes role of ICC/IPs in nation building this IP month
What’s at stake for every fighter at ONE: NextGen
Isko Moreno bares ‘two-pronged’ approach to rehabilitate MSMEs
NCR’s COVID-9 alert level may be downgraded from 3 to 2 soon — DOH
Gordon calls 2 Pharmally execs ‘Senate fugitives’ after no-show in probe
MOST READ
Drivers with no traffic violations can now renew licenses for 10 years
LJ Reyes says Paolo Contis made ‘no efforts’ to talk to her after their split
Yang’s Princeton degree raises eyebrows among senators
Gordon to Duterte: You? Teaching me courtesy?
Don't miss out on the latest news and information.