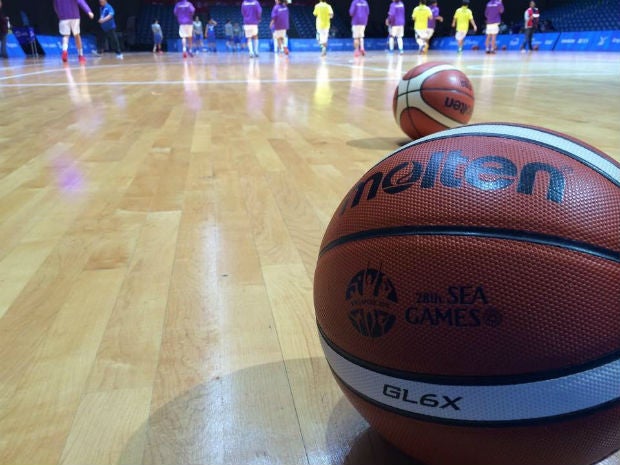 SINGAPORE—A less-experienced Philippine team took off on the wrong foot against seasoned Thailand at the start of women’s basketball in the 28th Southeast Asian Games here.

The defending champion Thais simply pounced on a string of endgame mistakes to hold off the Philippines, 62-57, in front of an animated cheering Filipino section at the OCBC Arena.

Afril Bernardino scored a game-high 19 points but the reigning UAAP MVP lost the leather twice in a decisive run and Camille Sambile misfired her shots that could had reversed the outcome.

It was practically the same Thai squad that dealt the Philippines a couple of heartbreaks in the past two SEA Games.

With the hopes of winning a first gold medal no longer in their hands, all the Filipino cagebelles could pray for is a defeat for the back-to-back champions in the six-team, single-round tournament where the team with most number of victories takes the crown.

“Indonesia is a tall team and the host country will also be there to give them (Thais) a challenge,’’ said head coach Patrick Aquino.

They were actually ahead, 46-43, early in the fourth, before the Thais mounted an 8-0 run that turned the tide.

Bernardo’s drive pulled them again within three, but Juthamas Jantakan competed a layup off a steal and converted another floater to make things quite edgy for the Filipinos.

From there, it was all about wasting the clock for the Thais as the Philippines madly went for quick possessions.

“I told them don’t give up. Try to get a steal and another basket,” said Aquino after a drastic bid to reduce the quotient in the dying seconds.

The Filipinos had 14 steals but committed 30 turnovers, something Aquino doesn’t want to happen against Vietnam Wednesday.

Jantakan and Penphan Yothanan combined for more than half of the Thais points with 37. Jantakan finished with a game-high 20 points that went with nine rebounds while Yothanan had 17 on 8-of-14 shooting.

Meanwhile, Sinag Pilipinas, the men’s national team made up of collegiate standouts, will open its title-retention bid today against Indonesia.

Shooting for a 17th cage title, the men’s squad should encounter little trouble going to the gold except for a rough patch that Singapore could lay down on its path. Mark Giongco/CFC