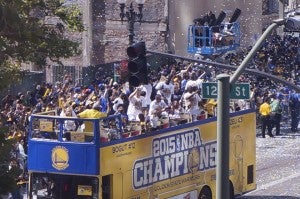 NBA champions Golder State Warriors being welcomed back in Oakland after victory. PHOTO BY GLADY MACALINO

OAKLAND, California — It didn’t seem to matter that San Francisco Bay Area basketball aficionados had to wait 40 years before they were able to savor again the sweet taste of winning a National Basketball Association (NBA) world championship.

In fact, it all made them yearn even more for their beloved Golden State Warriors to NBA champions again, and it was all worth the wait for a victory parade. Bay Area basketball fanatics, including Filipino-Americans, came in full force, shouting their voices hoarse while yellow and blue confetti rained on them from the top of buildings.

Fil-Am Warrior devotees made sure they were among the estimated one million supporters that flooded every corner of the two-mile rally stretch winding along major downtown Oakland streets to finally give the city an opportunity to bask in the limelight, far from the usual fare of bad news about violence and protests.

Mayors Ed Lee of San Francisco and Libby Schaaf of Oakland, who was with rapper MC Hammer on a snail float, and even San Jose Mayor Sam Liccardo came together in a sign of unity at a time when plans are afoot to transfer the Warriors’ base to San Francisco, which Oaklanders are trying very hard to stop. 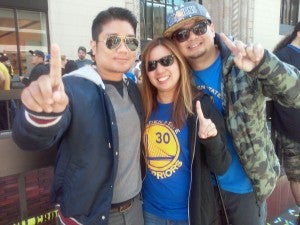 Chrisitian Benigno and Jayson Rabuay with a friend, cheering the Warriors. PHOTO BY JUN NUCUM

Yellow, blue and black T-shirts, posters, caps, sunglasses, hotdogs with bacon, corn and even fish cracker vendors made a killing as they spread all over, offering their goods to the delight of souvenir and food-hungry fans.

To Fil-Ams, some of whom came as far as Los Angeles (even wearing Laker jerseys)  to witness history and share the ecstatic feeling of being champions once again. A number of them were at choice rally sites as early as 10 p.m. the night before to make sure they avoided the rush the next day.

Christian Benigno from Los Angeles had been there since 1:30 a.m. together with a close friend.

“We are so happy I am in the company of winners. I am a Laker fan but like what my best friend said, it is Golden State so it represents the whole California not just Oakland or San Francisco. Although it is in the Bay Area, it brings with them the whole of California,” Benigno maintained.  . 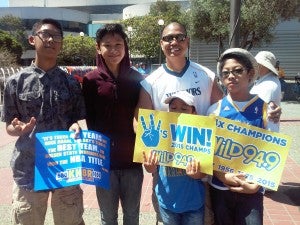 Mel Reyes and family; although one member is a Lebron James fan. PHOTO BY JUN NUCUM

Benigno’s best friend Jason Rabuay from Walnut Creek has been in the Bay Area since 1987 and dreaming of this NBA crown for 20 years.

“I have been with the Warriors through thick and thin. Finally it happened. A couple of weeks ago, it was a joke. It was like, ‘Hey, if the Warriors make it, let us go to the parade.’ And then they won on Tuesday, we go, ‘Oh my God. We have to go now (to the parade)’ because we said so,” Rabuay confessed.

“Being here and being with all these people is a dream come true. Teamwork absolutely won the championship for the Warriors. There is nothing but teamwork in this team and they really worked hard all throughout the season to be here. I think they’re going to be back next year although it is going to be harder for everybody now has figured out what teamwork would do and everybody will try to replicate it,” Rabuay added.

“We are all very excited we came all the way from Central Valley to come here and join the celebration. We will not let this chance to join the festive crowd pass. And with the way they are playing, they are going to do it again next year. All they have to do is stay healthy and they can do it again,” Reyes said.

For Reyes, the advantage of the Warriors is their strength, as if 13 players of the Warriors were competing against six Cavaliers because of a much deeper bench that included Klay Thompson.

Beside him, however, son Maximus Reyes was shaking his head in disagreement.

“No. They are not going to be back,” heckled Max, a LeBron James guy ever since he was little. “I like LeBron.  The entire series they were the underdog and everybody has so much hate for him because honestly he was off a bit cocky. But he gave his teammates confidence. Definitely, they will be back next year. They are missing two all star players the entire series. I am very confident that LeBron is going to stay with the Cavaliers. Next time it is going to be the Cavaliers. They will go all the way.”

That just shows that even in a close-knit family, members have to agree to disagree just like in a democracy. 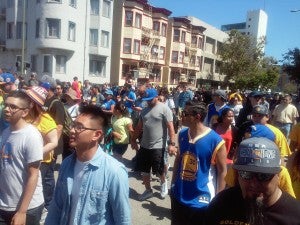 A throng of well-wishers marching towards the Warriors parade site. PHOTO BY JUN NUCUM

San Francisco resident Glady Macalino had work on the day of celebration but was very fortunate to have the best seat to watch as her office overlooks the main Oakland downtown streets where the victory parade passed.

“It’s wonderful to be part of yet another historical event in sports. Forty years is quite long for a championship and Oakland fans have long waited for a victory parade. We have some of the best FAN base in the Bay Area especially Oakland, may it be baseball, football or basketball. The recognition today in Oakland is nothing but LOVE. It was a very exciting, vibrant Gold and Blue people everywhere chanting their favorite NBA champs,” she exclaimed.

Glady didn’t hide her admiration for season MVP Stephen Curry, whom she called a great player, humble and very good looking as well and has a good head on his shoulder.

“This team reminds me so much of the (San Francisco) Giants who showed that during a game they work together as a TEAM. There was not just one person shining in that team but ALL the Warrior members were shining.  We tend to forget that in sports it is a TEAM effort and this team brought home the championship trophy this year. Bravo Warriors!” Macalino beamed.