So off to a bad start at Dortmund Sparkassen chess 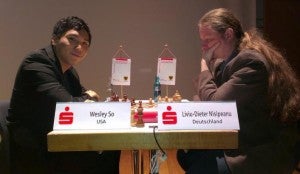 Grandmasters Wesley So (left) and Liviu-Dieter Nisipeanu square off in the first round of the Dortmund Sparkassen chess tournament in Germany. DORTMUND SPARKASSEN CHESS PHOTO

LAS VEGAS — Wesley So went down in defeat to one of the tournament’s lowest-ranked players in an inauspicious start for him in the Dortmund Sparkassen chess championship in Germany.

Considered one of the favorites in the tourney, the 21-year-old So lost to former Romanian No. 1 Liviu-Dieter Nisipeanu, whose 2,654 rating points are 124 points less of those of So’s, the No. 8 in the world.

“I just wanted to play a normal game against a very strong opponent,” Nisipeanu told Chess24.com. “(But) when I’m in good form, everything is possible.”

After tangling with mostly lower-rated opponents in his last two tournaments, So did not appear well-prepared against Nisipeanu, who seized every advantage he could get.

Very early into the game, the normally cautious So playing black, prematurely captured a knight on the 21st move instead of castling and putting up a more solid defense, analysts said.

Seven moves after that, the Filipino, now playing under the U.S. flag, not only returned the piece, but gave up the fight as well; one the few times he has lost at the start of a tournament.

It does not get easier for So.

In the second round, he faces Fabiano Caruana, who just competed in the recently concluded Norway Chess.

Caruana, rated No. 5 in the world, drew his first match with Ian Nepomniachtshi, who also reached Dortmund directly from a previous tournament — the Capablance Memorial in Cuba.

Two other grandmasters — George Meier and Hou Yifan of China — are seeing action in the 43rd edition of the annual event, one of the most prestigious in the European circuit.

Losses by Alexander Grischuk and Levon Aronian in Norway partly helped So keep his lofty ranking, although he lost more two rating points.

However, he has shown the ability to bounce back despite some stinging losses and he is expected to do it in Germany as well.