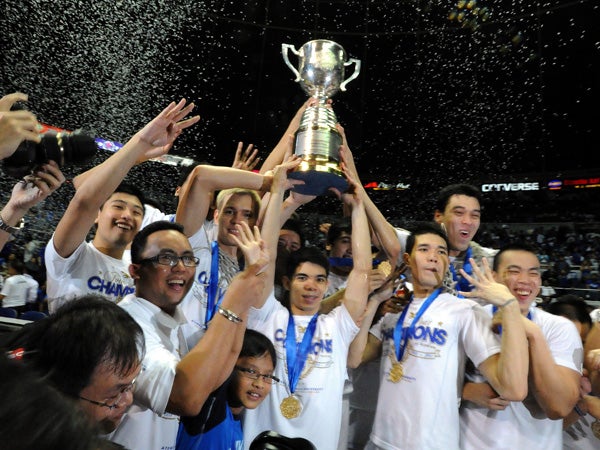 “We don’t know how long it’s going to last so we want to take advantage of it while we have the talent,” said Ateneo coach Norman Black. “We were hoping for a good year and we got one.”

Talent did abound for the Eagles this season with the phenomenal rookie duo of Greg Slaughter and Kiefer Ravena teaming up with veterans led by Nico Salva, Kirk Long and Emman Monfort.

Delivering again when it mattered, the Eagles took the fire out of the Tamaraws in the second half and wrapped up the best-of-three series in dominant fashion in front of a jam-packed crowd of 18,423 at the Smart Araneta Coliseum.

Salva captured the Most Valuable Player award of the Finals after averaging 19.5 points—built on a remarkable 78 percent shooting clip—and 5.5 rebounds per game.

Coming off a perfect Game 1 outing, Salva shone anew with 15 markers, including four straight points that got the Eagles rolling at the start of the second half.

“The previous three years, we worked hard for those championships,” said Salva, the 6-foot-4 forward who figured in all four of Ateneo’s title romp. “This is no different. We worked hard every day. We worked the hardest that’s why we’re here.”

Salva—who knocked in all of his attempts for a game-high 24 points in the Eagles’ 82-64 Game 1 win—also grabbed five rebounds, dished out a couple of assists and had a steal in the title clincher.

“He has a knack for being able to just surrender to the moment when it’s crucial, when it’s championship time. He has a tendency to just deliver,” Black said of Salva.

The victory propelled the Eagles to an elite club of teams with four consecutive titles, which includes archrival La Salle (1998-2001), University of Santo Tomas (1993-1996) and league record-holder University of the East (1965-1971).

“To put up a string of championship where you can really convince the same guys to continue to give their best every game, every year that’s what it really comes down to,” said Black.

Ravena—who copped the Rookie of the Year plum and was also named to the Mythical Team—delivered with a team-high 18 points, six rebounds and a pair of assists.

“I just want to end it on a good note,” said the son of former Philippine Basketball Association player Bong Ravena. “We wanted to bring out the best game of our lives. Everybody wanted to win.”

Slaughter, the tallest player currently in the league at 7 feet, again provided the intimidating presence at the paint to finish with 11 points, six rebounds two assists and a block.

“I couldn’t even process it all, I’m just so happy,” said Slaughter, the Filipino-American who traces his roots in Cebu. “They’ve been waiting for this. I’m just happy to get into this program. They took me with open arms, it worked out and here we are with a four-peat.”

It wasn’t just the team stars who clicked as the bench also stepped up in key stretches that helped the Eagles go up by as many as 19 points, 74-55, going into the final four minutes.

For FEU, it was a repeat of last year’s heartbreak where the Eagles also swept the Tamaraws in the best-of-three title series.

“They just played well,” FEU coach Bert Flores said succinctly of the champion squad that had their numbers all season.

Aldrech Ramos, a Mythical Team member this season, paced the Tamaraws with a game-high 20 points and 13 rebounds.

Last year’s MVP, RR Garcia, also had 16 points for the Tamaraws, who dropped all four meetings against the Eagles this season.

But it was a finale where the Eagles even held back, according to Black, as the Tamaraws even led at the half at 36-35.

“From a coaching standpoint, I was really trying to hold back on some things, particularly on  our pick-and-roll plays,” said Black, who joined La Salle’s Franz Pumaren, UST’s Aric del Rosario and UE’s Baby Dalupan on the list of league coaches with multiple titles.

“The reason for that is I don’t want them (Tamaraws) to read it and adjust at halftime. It really helped us out a little bit in the second half, because we were able to get the ball down back in the post area.”

Tightening up defensively, the Eagles held on to the double-digit advantage as Ravena, Monfort, Slaughter and Salva also teamed up in another fourth-quarter salvo that got them up by as many as 76-55.

“It’s just a combination of having good, young players and good veterans. Guys who have the championship experience and want to win, that’s the most important thing,” said Black.

“We talked about it all the time that if you’re at this level, you have to try to strive for something. For us, we just want to be known as the best college team in the country.”