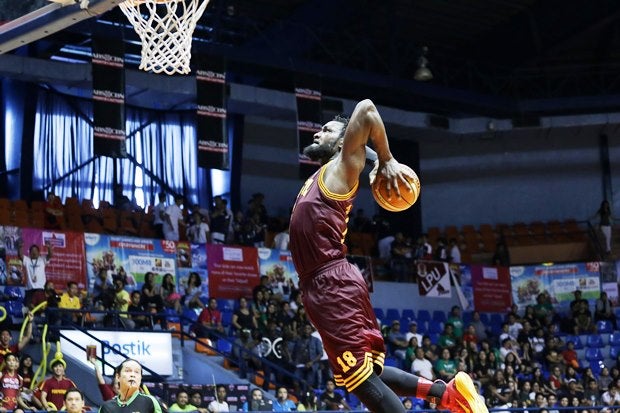 Delivering a performance for the ages just two games into the 91st NCAA basketball tournament, Bright Akhuetie looks like the missing piece to the puzzle in Perpetual Help’s bid for a first title in the longest running collegiate league in the country.

The 6-foot-8 Akhuetie pounced on an undersized St. Benilde frontline Friday, firing 44 points to power the Altas to a 77-69 triumph and a share of the early lead with San Beda and Letran.

The Abuja, Nigeria, native’s output was one of the highest since Jose Rizal U’s John Wilson scored 48 in the Bombers’ 95-85 win over the Blazers on Aug. 26, 2009. Wilson went on to win the season MVP award.

The Altas missed  another Nigerian reinforcement, Prinze Eze, who was suspended for unsportsmanlike conduct in the Altas’ 70-61 win over Lyceum last Tuesday, prompting Akhuetie to play major minutes.

What made Akhuetie’s performance even more impressive was the fact that he also finished with 19 rebounds on top of a couple of blocks.

“We are lucky to have him in the team,” said coach Aric del Rosario, referring to Akhuetie who was named the Accel Quantum and 3XVI-NCAA Press Corps Player of the Week. “He’s heaven sent. He works hard on the court and has a good attitude off the court, which is a bonus for us as coaches.”

Akhuetie was just as delighted over his performance, but stressed that the victory was even more important.

“Actually, I don’t care about the scoring.  I care about the win,” said Akhuetie who averaged a league-best 26.5 points and 15 boards in his first two games.