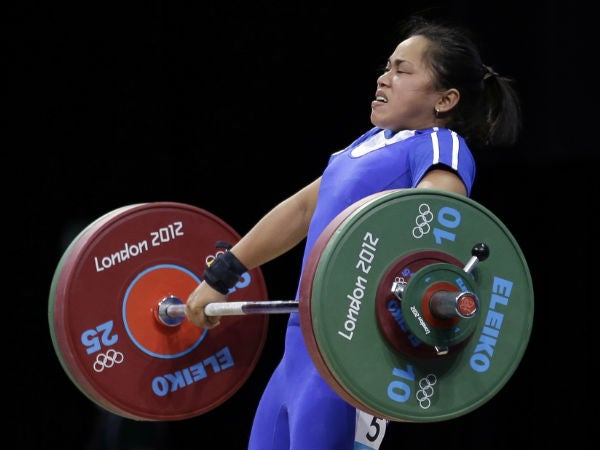 Hidilyn Diaz of the Philippines competes during the women’s 58-kg, group B, weightlifting competition at the 2012 Summer Olympics, Monday, July 30, 2012, in London. (AP Photo/Hassan Ammar)

Lifter Hidilyn Diaz went down to her favorable weight in an earnest bid for a podium finish in the 2016 Rio Olympics.

The two-time Olympian reduced mass from the usual under 58kg to -53kg that proved effective after the 24-year-old from Zamboanga City recently won the gold medal in the Southeast Asian Weightlifting Championship in Bangkok.

“I could really tell the difference. I feel more stronger than before,” said Diaz, the country’s flag-bearer during the opening ceremony of the 2012 London Olympics.

She weighed around 56kg during her first Olympic stint in 2008 Beijing Olympics and jacked up mass to 57.70kg in London but still failed to finish in the upper half of the competition.

The first Filipina lifter to see action in consecutive Olympics made it to London after ranking ninth in her weight class (-58kg) in the continental and world qualifying tournaments.

“I sacrificed a lot in terms of cutting down weight. Hopefully, I could win a medal this time,” said Diaz.

In Bangkok, Diaz managed to lift 98kg in the snatch and 115kg in the clean and jerk for a 213kg total. The result is good for 4th place in the London Games.

The Philippines hasn’t won a medal of any color in the Olympics since boxer Mansueto “Onyok” Velasco bagged a silver medal in the 1996 Altlanta Games.

According to Cojuangco, the POC and the Philippine Sports Commission are ready to invest on the foreign training of Diaz until the Olympics.

“She’s obviously talented. After going down from 58kg to 53kg, it means you will be competing with lesser opponents,’’ said Cojuangco. “We’re ready to pour our resources for her training.”