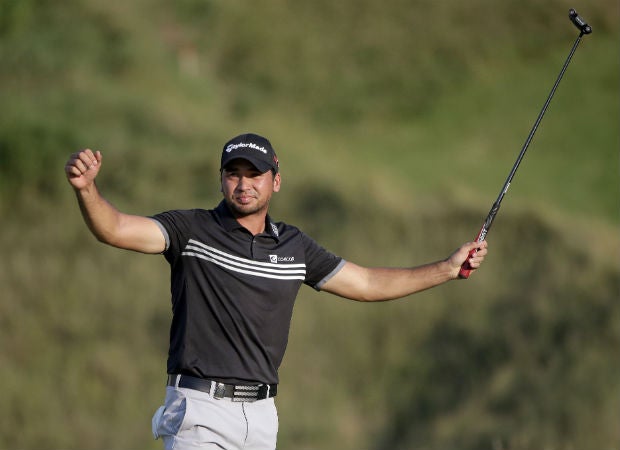 SHEBOYGAN, Wisconsin, United States — A year of major heartache ended with Jason Day breaking through in a major way Sunday at the PGA Championship.

With at least a share of the 54-hole lead for the third straight major, the Filipino-Australian never gave Jordan Spieth or anyone else much of a chance at Whistling Straits. He closed with a 5-under 67 for a three-shot victory and broke Tiger Woods’ major championship record for most strokes under par by finishing at 20 under.

In tears before tapping in for par, Day hugged his son and wife and then Spieth, who earned a small consolation prize with his runner-up finish. Spieth moved to No. 1 in the world, ending the one-year reign of Rory McIlroy.

“I didn’t expect I was going to cry,” Day said. “A lot of emotion has come out because I’ve been so close so many times and fallen short. To be able to play the way I did today, especially with Jordan in my group, I could tell that he was the favorite. Just to be able to finish the way I did was amazing.”

What a journey for the 27-year Australian, whose Filipino mother migrated to Australia some 30 years ago.

He understood hard times as a youth when his father died of cancer when Day was 12. In 2013, Day lost 8 relatives, including his grandmother, when Typhoon Yolanda (international name “Haiyan”) devastated eastern and central Philippines.

For all his talent, he was questioned for winning only one tournament in five years on the PGA Tour. With a share of the lead at the U.S. Open and British Open, he had to watch someone else celebrate.

Not on this day. Not even close.

Day started the final round with a two-shot lead and no one got any closer than that the entire day. His lone shaky moment came at the end of the front nine, when he made his first bogey on No. 8 and then chunked a wedge from the fairway on No. 9. But he saved par with an 8-foot putt and was on his way.

And he knew it at the end.

With a three-shot lead on the par-5 16th, Day hit a high draw onto the green, bit his lower lip and swatted longtime coach and caddie Colin Swatton in the arm. That two-putt birdie took him to 20 under, and two pars sealed the victory.

Woods finished at 19 under when he won the 2000 British Open at St. Andrews.