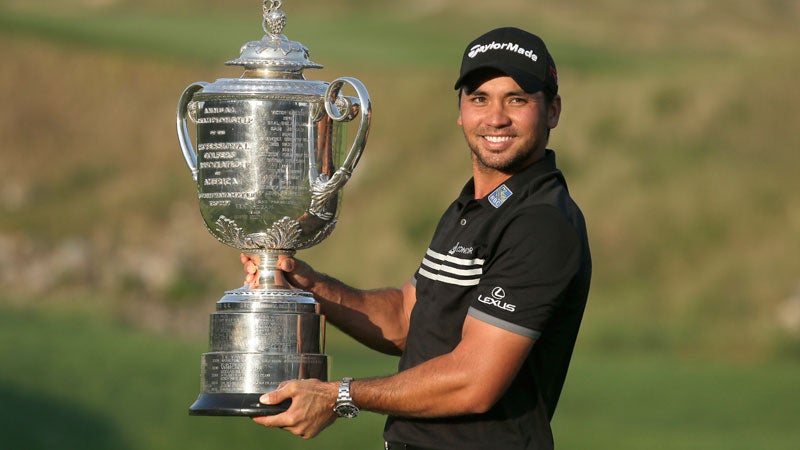 Australia’s sporting fraternity saluted Jason Day’s victory in the PGA Championship as a triumph over adversity. While the world of golf rejoiced, Day’s Filipino relatives in Leyte province appeared oblivious of his triumph.

Told of Day’s spectacular win in Wisconsin in the United States, some of his relatives in Leyte expressed their happiness but sounded less than ecstatic.

“He won? Really? Well, we are happy for his victory,” said Balcarin Grapilon, an uncle. Grapilon is the younger brother of Day’s mother, Dening, who left the Philippines in 1982 for Australia.

Grapilon said that golf was not a widely popular sport in the Philippines, the reason Day’s victory could hardly be felt in Carigara town, 55 kilometers from the Leyte capital of Tacloban City.

But Grapilon wished his nephew would come to Leyte so he and the rest of the clan could personally congratulate him.

In a statement in Filipino, Presidential Communications Secretary Herminio Coloma said: “His victory was all the more enhanced by his recording the lowest score in a major golf championship. Truly, the Philippines is proud of Jason Day, a champion.”

Beginnings of a champion

Day is of Australian and Filipino parentage, the fifth golfer from Australia to win the PGA title and the 12th to win a major championship—the first since Adam Scott in the 2013 Masters.

After Day closed with a 5-under 67 at Whistling Straits in Wisconsin for a three-shot victory and a majors record 20-under total, Australian tennis and cricket players and racing drivers were among those quick to congratulate Day.

Growing up in the regional Queensland state towns of Beaudesert and Rockhampton, Day lost his father, Alvin, to cancer when he was 12 and battled alcohol and aggression at a young age.

It was Alvin who had enrolled Day as a junior member at Beaudesert Golf Club at age 6 and gave him his first golf club, but it was Filipino mother Dening from Carigara who—worried at her son’s increasing waywardness—later scraped together the money to send Day a few hours away to board at Kooralbyn International School and then Hills International College.

At Kooralbyn—which had a golf course attached to its grounds—Day met coach Colin Swatton, who has been both his caddie and confidant throughout his professional career. Swatton had rescued Day as a 12-year-old struggling to overcome the death of his father.

After Kooralbyn closed, Day and Swatton moved to Hills International College, which had a dedicated golf program.

It was there that Day borrowed a book about Tiger Woods from a roommate and was spurred to take his golf even more seriously, practicing up to 30 hours a week.

Dening Day was at work and missed watching the final holes of the PGA Championship, relying instead on updates on the PGA website.

“It takes a long time before it gets updated,” she told Australian Broadcasting Corp. radio on Monday. “It gets a little bit anxious.”

That anxiety turned to elation when it became clear what Day had achieved.

“I was so excited, I was so proud of him,” Dening said. “It has been a long time coming for him. It’s a culmination of all his hard work.”

Day expressed his own relief that he would no longer be known as the best golfer not to win a major, tweeting, “Ding, dong the witch is dead” after the victory.

Congratulations came from contemporaries and compatriots.

Two-time US Open champion Greg Norman wrote on Instagram, “Congratulations to my fellow Queenslander and Australian

(Jason Day) and his beautiful family Ellie and Dash for joining the elite club being a major winner.”

Sydney Morning Herald golf writer Matt Murnane said that with his win in the final major of the year, Day “becomes a legitimate contender, alongside the game’s other under-30 superstars, world No. 1 Spieth and No. 2 McIlroy.”

To add to his early trials, Day lost eight family members in the Philippines to the devastation wreaked by Supertyphoon “Yolanda” (international name: Haiyan), then collapsed on the course during the US Open because of an ongoing illness.

Writing in Queensland’s Courier Mail newspaper, Jim Tucker said: “All the armor-plating from the near misses and the heartbreaking losses from Day’s past surfaced to produce a true major champion.”

“The popular Queenslander, who first grabbed us for a roller coaster run at the 2011 Masters at Augusta when he finished a heartbreaking second in his first major, has deserved this,” he added.

Town councilor Dennis Garay said Day’s win was a “big victory for the people of Carigara,” and added: “We will pass a resolution commending his great triumph as PGA champion.”

It was learned from Day’s Leyte relatives that he has never visited Carigara town. His mother and elder sister Kim visited the town though in 2008.

During the onslaught of Yolanda, Day’s grandmother, Adelaida, an uncle and six other relatives died in a storm surge.

“Though we can’t do anything to bring loved ones back, what we can do is provide hope as well as the necessities to those still living in terrible conditions,” Day said in November after learning of the deaths of his relatives.

Soon after, Day and his wife, Ellie Harvey, mobilized Brighter Days Foundation, a charity group they founded, to send relief to some 75,000 victims of Yolanda in Leyte and Samar.

It was from his mother and his sister Kim that Day learned about the tragedy caused by the typhoon a few days after his 26th birthday on Nov. 12.

Dening immigrated to the Queensland area in Australia in 1983 to be with her pen pal Alvin Day, an Irish immigrant she later married.

It was Alvin who would become the driving force behind their son to start playing golf at age 6.

Later, Dening would sell their house and enroll the young Jason in a prestigious boarding school where he would meet Adam Scott, then the world’s No. 2 behind Woods.

Afterward, Day became emotional when he talked about how his toughest loss—the death of his father—made his golf career possible. After his

father’s death, Day began abusing alcohol and getting into fights in school.

His mother, fearful of losing him to the streets, sold their home and borrowed money to send Day to a boarding school, where he came under the tutelage of Swatton.

“To have him walk up the 18th hole with me was just a special, special thing that I could never forget,” Day said.

For a few years, Day has been considered perhaps the best golfer not to have won a major. It is a label he is relieved to have shed.

“Knowing that I had the 54-hole lead for the last three majors and not being able to finish, it would have been tough for me mentally to really kind of come back from that,” Day said after his victory Monday.

“Even though I feel like I’m a positive person, I think that kind of in the back of my mind, something would have triggered, and I would have gone, ‘Maybe I can’t really finish it off.’”–Reports from AP; Joey A. Gabieta, Inquirer Visayas; Jerry E. Esplanada in Manila; and Danny Petilla, contributor

Great Day for his mom’s roots, too

Day wins a major: 5 things we learned at the PGA