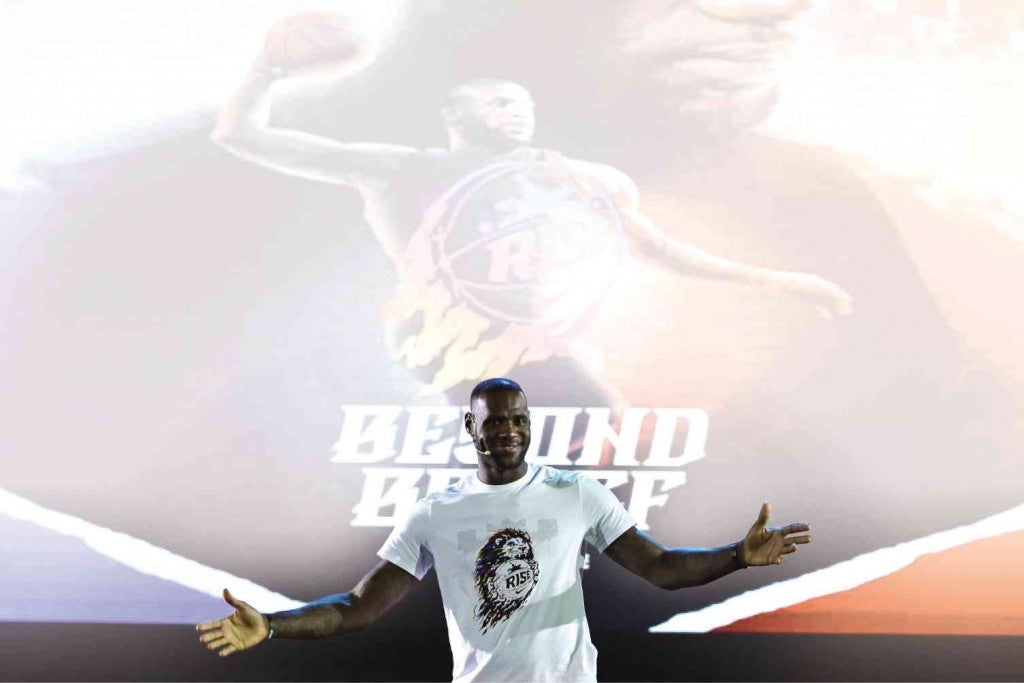 NBA superstar LeBron James gestures as he says thanks to Filipino basketball fans during the Nike press conference at House of Rise in Mandaluyong. RAFFY LERMA

NBA superstar LeBron James may have left a thrilling impression on Filipino fans in his first visit two years ago. But the four-time NBA MVP hopes to make a bigger impact on his return trip to Manila.

“I think more than teaching the skill set, I think it’s the inspiration behind it,” said James yesterday before he served as mentor to aspiring players in Nike Rise, a basketball development program of the global shoe brand.

“[I want] to tell them about the game and it’s up to them how to use that and better themselves.”

Dressed casually in a white shirt and blazing red shorts, James said it’s a treat to be back in this basketball-crazy nation that shares his zeal for the sport.

“It’s great, like I said before, I’ll be back here,” said James in a brief press conference at Nike House of Rise in Mandaluyong City. “You welcome me and my guys with open arms, so it’s always a pleasure.”

James quietly slipped into the country in a private jet on Wednesday night, avoiding the media and fanfare that usually greet celebrities at the airport. He is billeted at Makati Shangri-La.

But the Cleveland Cavaliers forward was back in his flashy element last night as he amazed Filipino fans the second time around in a blockbuster exhibition match at Mall of Asia Arena.

“The [Filipinos’] commitment to the game,” James said of what impressed him in his Manila visit. “They love the game they play, you can tell they’re having fun. I can always relate to that passion for the sport.”

“My story speaks for itself,” said James. “I was a kid who believed that I can make my dreams into a reality. I knew it will take a lot of hard work and sacrifice and a lot of love—you have to love the game.”

James first visited the country in July 2013, where he came fresh from winning his second straight NBA championship with the Miami Heat.

The one-day trip, dubbed as the  “Witness History” tour, also featured James in an electrifying showdown with Philippine team members and varsity standouts at Mall of Asia Arena.

Just as he promised then, James stayed a bit longer. He is also set to drop by a Nike store and a tenement in Taguig City before leaving tonight.

“It was an exciting time two years ago,” said James, smiling. “Being around the fans again, I’m looking forward to that.”