Fraser-Pryce gets golden match with Bolt over 100 at worlds 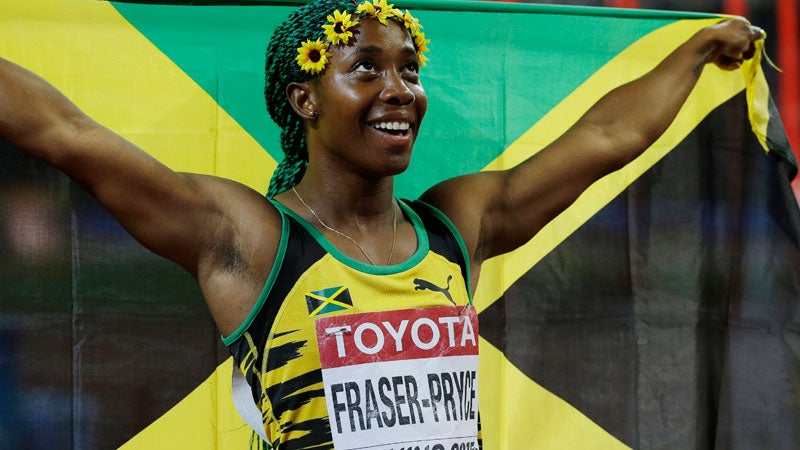 Jamaica’s Shelly-Ann Fraser-Pryce celebrates after winning the gold medal in the women’s 100m at the World Athletics Championships at the Bird’s Nest stadium in Beijing, Monday, Aug. 24, 2015. (AP Photo/Kin Cheung)

BEIJING — Shelly-Ann Fraser-Pryce made it another Jamaican night at the Bird’s Nest, sprinting to the 100-meter gold at the world championships for a record-tying third time — a feat that matches teammate Usain Bolt.

Like Bolt, Fraser-Pryce came into the event with two Olympic and two world titles in the 100. And after Bolt ran to his third gold on Sunday, Fraser-Pryce did likewise on Monday.

Unlike the thrilling come-from-behind win of the lunging Bolt in Sunday’s final, Fraser-Pryce bolted from the blocks, powered through midway and was able to lift her right arm and index finger in victory as she crossed the line in 10.76 seconds.

Behind her, former heptathlete Dafne Schippers set a Dutch record for silver in 10.81, edging Tori Bowie of the United States by .05 seconds.

Bolt is known around the world for his signature “Lightning Bolt” pose, and Fraser-Pryce has made spectacular hairdos her specialty. She won the 2013 world title with bright pink hair, but it was all daisy and grass-green locks in Beijing.

“I wanted green in my hair, so I did green. And I got my sunflowers to match,” Fraser-Pryce said. “I’ve never done it before. Just said, ‘OK, I’m doing my hair green.'”

Fraser-Pryce is the only woman with three 100 world titles, matching Bolt and American runners Maurice Greene and Carl Lewis overall.

Although the Jamaican dominance in the sprints has been overwhelming the past years, the Kenyan dominance in the 3,000-meter steeplechase goes back decades. And it was flaunted again on Monday as Ezekiel Kemboi won his fourth straight world championship title, finishing it off with his trademark dance wrapped in the Kenyan flag.

“That is always the celebration,” said the 33-year-old Kemboi, who is also a two-time Olympic champion and still has his eyes on the 2016 Games in Rio de Janeiro.

Just as predictable as Kemboi was the victory of Caterine Ibarguen in the triple jump. The Colombian extended her unbeaten run to 29 events and retained her title with a winning leap of 14.90 meters. The Olympic silver medalist hasn’t been beaten in three years.

In the biggest surprise of the night, Olympic champion and world-record holder Renaud Lavillenie again missed out on the world title, failing three times at 5.90 meters and leaving the gold medal to Shawnacy Barber of Canada.

In a tight competition, Barber scaled 5.90 meters and got the title on a countback over defending champion Raphael Holzdeppe. Lavillenie ended up tied for the bronze with two other competitors at 5.80.

After Jessica Ennis-Hill came back from motherhood to win the heptathlon title on Sunday, Vivian Cheruiyot of Kenya did similar in the 10,000, beating Gelete Burka of Ethiopia.

“I was so happy for Jessica,” Cheruiyot said. “It shows that everything is possible.”

In a tight finish behind the top two, Emily Infeld of the United States took bronze, overtaking teammate Molly Huddle, who was celebrating a medal too early, on the line.

Although Bolt’s stunning come-from-behind win over the favored Justin Gatlin in the 100 was a day old, it continued to make waves on Monday.

Standing on the podium just after receiving his silver medal, Gatlin gestured toward a heckler who was bothering his mother in the stands. He scowled and pointed at the offender.

“I was like, ‘Hey, chill out with that. Be a gentleman,'” Gatlin told The Associated Press. “No one has to talk disrespectful to anybody.”

Gatlin has been a controversial figure in the sport since his return from a four-year doping ban in 2010.