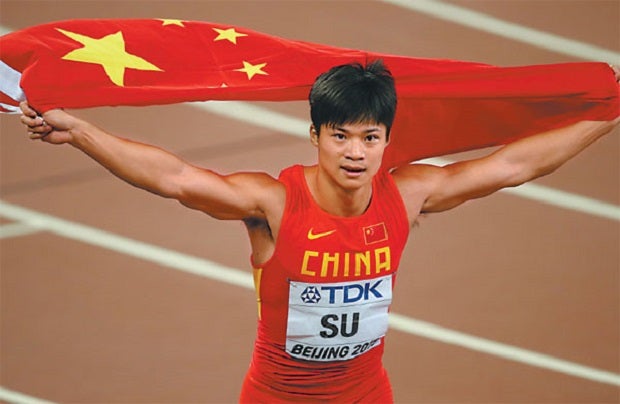 Chinese sprinter Su Bingtian made history on Sunday by becoming the first Asian athlete to appear in the men’s 100m final at the world athletics championships.

With the huge crowd at the Bird’s Nest keeping their fingers crossed and hoping for a miracle, Su delivered a national record-tying result of 9.99 seconds in the semifinals to qualify as one of the nine fastest men in the world.

“Never in my wildest dreams did I ever imagine reaching the final of the world championships, and now that I’ve done it I still can’t believe it happened,” Su said after the semis.

Although he finished ninth in the final with a time of 10.06 seconds, Su cemented his status as a groundbreaker to be remembered in the history of Asian athletics.

Jamaica’s world and Olympic champion Usain Bolt clocked 9.79 to win gold, while Justin Gatlin of the US took silver (9.80) and Canada’s Andre De Grasse and Trayvon Bromell of the US tied for bronze (9.92).

Now Su envisions a bigger breakthrough in the men’s 4X100m relay on Aug 29.

“The relay will be a bigger challenge for us, but judging from the result we achieved last year, it’s possible for us to make it into the top five (in the final). The relay race reflects the overall level of a country’s strength in sprinting, and we’ve made big progress,” said the 25-year-old.

After training in Florida at the beginning of this year, Su sprinted to a national record 9.99 sec to become the first Chinese to crack the 10-sec barrier after finishing third at an IAAF Diamond League meet in Engene, Oregon.

“Definitely, he’s the true Asian sprinting hero and the pride of Chinese athletics. I think he will be the new darling of Asian fans after Liu Xiang retired,” race fan Li Minghao said of Su, who was born to a rural family in Southern China’s Guangdong province.

Xiong Xibei, a professor of athletic training at Beijing Sport University predicts Su’s full potential is yet to be discovered.

“If he continues training under the most advanced guidance in the US and remains free from injury, I think his limit will be around 9.96 sec,” Xiong said.