Fan dies after fall from upper deck at Braves-Yankees game 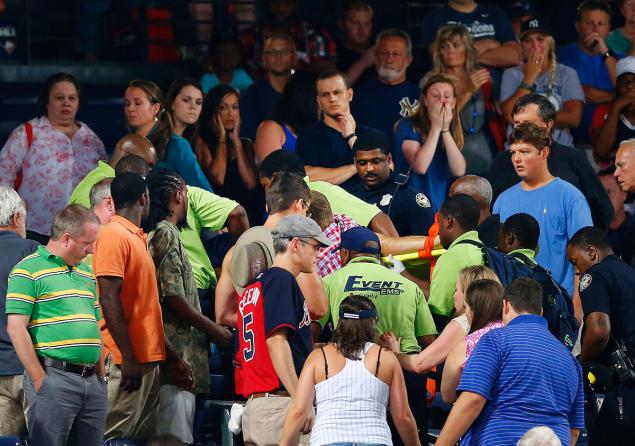 Rescue workers carry an injured fan from the stands at Turner Field during a baseball game between Atlanta Braves and New York Yankees, Saturday, Aug. 29, 2015, in Atlanta. The fan fell from the upper deck into the lower-level stands and was given emergency medical treatment before being taken to a hospital. AP

ATLANTA — A fan died after falling from the upper deck into the lower-level stands at Turner Field on Saturday night during a game between the Atlanta Braves and New York Yankees.

Lt. Charles Hampton of the Atlanta Police Department homicide unit confirmed the death hours after the fall in the seventh inning.

Hampton said the man was in his early 60s and was pronounced dead at Grady Memorial Hospital. There was no immediate word on his identity pending notification of his next of kin.

Hampton said police don’t suspect foul play at this point. He said no fans were hurt in the lower level seats where the man fell.

The man fell from section 401 and landed close to a 200-level area where players’ wives and families sit. There was blood on the concrete surface around the seats.

There was no delay in the game while stadium medical personnel treated the man for about 10 minutes, applying CPR. As they worked in a circle around the man, security officers cleared the area. The fan was taken from the seating area on a backboard, and transported to the hospital.

Yankees shortstop Didi Gregorius was standing on second base, following his double, when he saw the man fell.

“I was thinking about it the whole time,” Gregorius said after the Yankees won 3-1. “All I can say is my condolences to the family. It was right in front of the camera in the press box. He hit the wires.”

The fall immediately followed the introduction of Yankees slugger Alex Rodriguez as a pinch hitter in the seventh inning.

Major League Baseball said it had been in contract with the Braves and was monitoring the situation.

A sellout crowd of 49,243 was the largest of the season at Turner Field. The Braves are set to move into a new suburban stadium in 2017.

Adam Staudacher and his girlfriend were returning to their seats near where the fan fell.

Staudacher, 33, from Virginia Highlands, Georgia, said it appeared the fan landed headfirst on a 3-foot-wide walkway between sections. He estimated 20 EMTs immediately surrounded the fan and began doing CPR, adding they treated him for “five to seven minutes” before taking him away.

Staudacher said he saw no movement from the fan.

“There were a ton of kids right there,” he said. “It was a disturbing scene. Disturbing doesn’t really go far enough.”

Staudacher said Braves representatives came around in eighth inning to check on fans and offered them seats in suites, away from where the fan fell.

“The Atlanta Braves offer their deepest condolences to the family,” the team said in a statement.

MLB has said this season that it is studying the issue of fan safety in the wake of several people being hurt by foul balls and flying bats. Some players have called for more protective netting around the field.

A fan died at Turner Field on Aug. 12, 2013, after falling 85 feet from a walkway on the fourth level of the stadium. Investigators from the Fulton County Medical Examiner’s office later ruled that the death of Ronald Lee Homer Jr., 30, was a suicide.

Police said Homer, of Conyers, Georgia, landed in the players’ parking lot after a rain delay during a game between the Braves and Philadelphia.

In Texas, a man fell about 20 feet to the ground beyond the outfield fence trying to catch a baseball tossed his way by Rangers outfielder Josh Hamilton. Shannon Stone, 39 and a firefighter in Brownwood, Texas, was attending the Rangers game with his young son.

Earlier that year, a 27-year-old man died after falling about 20 feet and striking his head on concrete during a Colorado Rockies home game. Witnesses told police the man was trying to slide down a staircase railing at Coors Field and lost his balance.

At Turner Field, a woman went to the Braves dugout and told catcher A.J. Pierzynski about what had occurred.

Some family members were escorted to a room near the Braves clubhouse. Many, including Atlanta outfielder Cameron Maybin’s son, were crying.

“None of our family guys got hurt other than there were some young children there that got to see stuff that’s not real nice,” Braves manager Fredi Gonzalez said.

A security guard at the holding room for family members said witnesses saw the man trying to hang onto a wire that runs from the protective net behind the plate to under the press box. The man then fell the rest of the way into the seats.

The force of the man’s weight caused the wires and the mesh netting to shake for several seconds.

“That’s terrible,” Braves pitcher Matt Wisler said. “You never want to hear something like that. We’re all in the dugout paying more attention to that than we were the game when it first happened.”

Police blocked off about 10 rows of seats in section 201. There was security tape around the area following the game.