Fermin on ejection: ‘That’s how I fight for Adamson’ 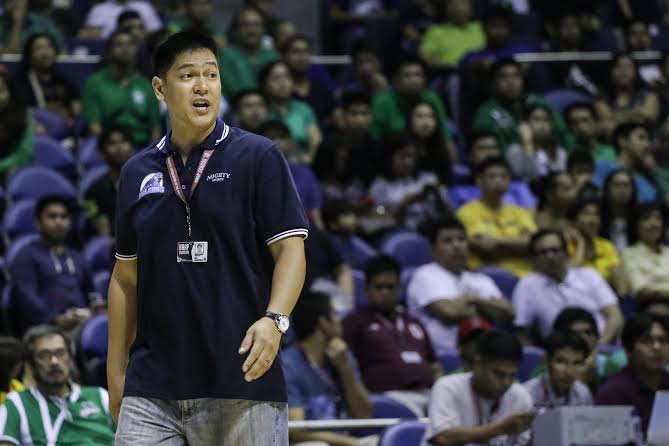 Adamson interim coach Mike Fermin says he’s ready to face the consequences after getting ejected during the Falcons’ loss to the De La Salle Green Archers on Sunday. Tristan Tamayo/INQUIRER.net

Adamson interim coach Mike Fermin cried foul on what he felt was poor officiating with the Falcons getting the bad end of it.

Emotions got the better of Fermin and he was ejected in the early part of the fourth quarter of Adamson’s 88-71 loss to De La Salle, its fourth in as many games.

“For me, [I want it to] be consistent on the officiating side,” said Fermin after the game on Sunday at Smart Araneta Coliseum. “We were making our run. One bad call did us. In the first half, we really had a bad start but the effort of my players was there and I felt sorry for them. There efforts were there and they just did that to us.”

The Falcons were trailing 72-54, when Fermin was tossed out of the court with still 6:46 left after arguing the unsportsmanlike foul called against his team captain Dawn Ochea.

An earlier technical was charged on the bench for the same reason, though, Fermin claimed that the referees had no clear explanation for the technical foul called the moment they blew the whistle.

(It’s not even clear. They didn’t give us a reason for that technical they gave. They said it was resentment to a call, but it’s always that. The referee even said, ‘It was a judgment call.’ I said, ‘Yes, it was your judgment, a poor judgment on your part.’ Imagine, they will call an unsportsmanlike to a player who’s not known for such? It was unintentional.)

That call on Ochea came at a crucial time for Adamson with the Falcons making a late run to recover from a 26-point deficit and even got to as close as 11.

Fermin also said he will accept the consequences of his actions but he and the team will also be ready to contest the technical fouls and unsportsmanlike foul called against them.

“There’s no problem (if the UAAP suspends me). I’m fighting for my team. I apologized to the players, to the admins, and to the community of Adamson because I want to win, we want to win,” he said.

“That’s how I fight [for my team]. I’d rather be the one ejected, not you. But if there’s a punishment that’s a one-game suspension, there’s no problem, but we will contest what happened earlier. We are ready to contest.”