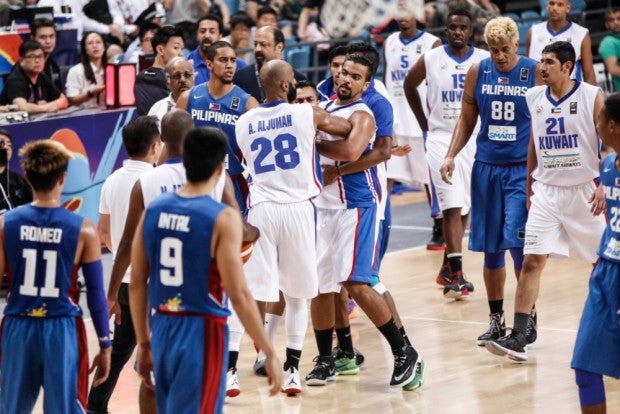 A near-brawl towards the end of the Philippines vs Kuwait match. Photo from Fiba.com

CHANGSHA CITY, China – The only thing dramatic in Gilas Pilipinas’ 110-64 rout of Kuwait on Friday night at the conclusion of the Filipinos’ first round assignment in the Fiba Asia Championship was the near bench-emptying incident with under a minute left.

Otherwise, the Filipinos were in complete command, with coach Tab Baldwin having the luxury of resting his aces and giving some of the role players valuable experience as Team Philippines takes a winning feeling into the second round where the competition will be several notches higher.

The Philippine domination of the Kuwaitis was set aside for a while with 48 seconds to go when Ranidel de Ocampo and Abdulaziz Alhamadi got entangled in a play that left the Kuwait forward bloodied in the kisser.

Alhamadi refused to be pacified, even threatening the referee who didn’t call a foul in the play.

“Your player started it, when he hit our player and the score (lead of the Philippines) was already very big,” said Kuwaiti coach Khaled Yousef during the press conference, pointing a finger at De Ocampo.

Still, it was another overpowering performance by the Filipinos, which came on the heels of a 101-50 plastering of Hong Kong on Thursday morning.

Terrence Romeo snapped out of his shooting slump and tossed in 19 points, Jason Castro added 16 and every man in Tab Baldwin’s bench contributed offensively as the team takes a break on Saturday in awaiting its first second round foe.

READ: Fiba Asia: New star on the rise for China in Zhou Qi

“He (Alhamadi) had been giving out cheap shots to everyone,” De Ocampo said in Filipino. “I took it upon myself to protect my teammates. We’re in a war here. He was dishing it out and he should have been ready to take shots as well.”

Andray Blatche started out and contributed eight points with the same number of rebounds in just 18 minutes.

The Philippines doubled up on the Kuwaitis in the rebounding department, 52-26.

“I don’t have enough to say about the game,” Baldwin said in the press conference. “It’s kind of an uneventful game in a basketball standpoint. “
The Philippines will advance to the next round together with tormentor Palestine and Hong Kong and will join qualifiers coming from Group A to form Group D.

There, the Filipinos will be up against defending champion Iran, Japan and India, the final positions to be known after the end of the heavy schedule on Friday.