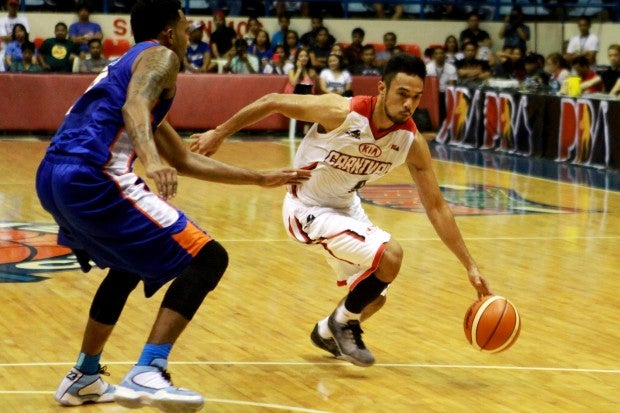 In only his second year in the PBA, Alex Nuyles is facing the possibility of sitting out the 41st PBA season.

After being sent to the PBA expansion pool just a year ago, Alex Nuyles finds himself facing the unknown once again.

Having no guarantees that he will suit up for any PBA team this coming 41st PBA season, the 26-year-old combo guard took his plight to Facebook.

“They offered a contract, I signed, short notice, contract was not valid? I guess no more PBA games for me this year? Missing my old team,” Nuyles said in a post, with a photo of him shooting a free throw in a Rain or Shine jersey.

The former Adamson Falcon was picked ninth in the 2013 PBA Draft by Rain or Shine before being unprotected in the 2014 Expansion Draft. He was nabbed by Blackwater and was later traded to the Kia franchise for Reil Cervantes last March.

Though he refused to divulge on the particulars, Nuyles has been left out of the rebuilding Kia franchise, now renamed Mahindra.

Mahindra team manager Eric Pineda explained to INQUIRER.net that Nuyles’ ouster from the team is as simple as management’s decision.

“With the change of our name from Kia to Mahindra, the top management also changed, and with that, we had a new head of basketball operations,” he said.

“Lahat ng mga contracts na pinirmahan ng mga players, naka-hold at binago lahat. (All of our players’ contracts were held and changed.) They had a say on the players they want, and it so happened that di nila gusto yung pinakita ni Alex (they didn’t like what Alex brings) that time and they didn’t want to sign him.”

The amiable team manager said that while Nuyles claimed to have signed a contract, it was never signed by the management as the Enforcers opted for a new-look team this upcoming season.

“We talked to Alex’s manager and explained that although he signed a contact, that was never signed by the management and there was no UPC (uniformed player contract) handed out to the player. The head of basketball operations felt that he wasn’t fit with our new system,” said Pineda.

Mahindra also looked at the market for a possible trade for Nuyles, but they found no takers for the swingman.

Recently, INQUIRER.net caught up with the 6-foot-2 swingman as he was trying out for a spot with NLEX in the offseason.

But with glut of players in the same position as Nuyles’ in the Road Warriors Rosters, that proved to be a problem.

“There’s no question that Alex is a PBA talent. Unfortunately, I can’t get him for NLEX because he has to settle his contract with Kia first, as well as we have so many combo-guards here in NLEX. It’s a pity that I can’t maximize Alex’s talents here,” said NLEX coach Boyet Fernandez.