Barca fights back 2-1 over Leverkusen without injured Messi 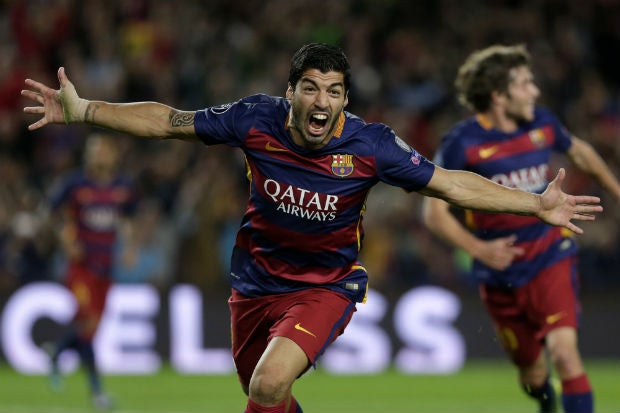 BARCELONA, Spain—Barcelona needed two goals in the final 10 minutes in the absence of injured star Lionel Messi to come back for a 2-1 home win over Bayer Leverkusen and take the Group E lead in the Champions League on Tuesday.

Sergi Roberto poked in the rebound of a strike by fellow substitute Munir El Haddadi to equalize in the 80th, and two minutes later El Haddadi passed for Luis Suarez to drive in the winner.

Leverkusen outplayed the defending champions for an hour and looked set to take revenge for its 7-1 loss last time the German side visited Camp Nou in 2012 when Messi scored a record five goals.

Defender Kyriakos Papadopoulos scored the opener in the 22nd, but Leverkusen faded late and didn’t have the legs to keep up with Barcelona’s reinforcements.

Already facing two months without Messi after he tore a left-knee ligament Saturday, Barcelona also lost Andres Iniesta to injury in the second half.

“We are the European champions and we knew that in the second half we had to show it,” Suarez said. “It was important to win, above all playing at home.”

Barcelona rose to the top of the group with four points, followed by BATE and Leverkusen with three each. Roma has one point.

Chants for “Independence!” by those Catalans who want the region to break from the rest of Spain were heard at the start of the match when regional president and separatist leader Artur Mas took his seat next to Barcelona club president Josep Bartomeu.

But that defiant political chants soon turned into the shrill whistles of annoyed football fans as a Barcelona side that still boasted loads of world-class talent was outplayed by the much more modest Leverkusen.

Leverkusen’s strategy was clear from the start as pressured Barcelona up the pitch instead of hunkering down in its area.

The decision almost led to an early goal when Barcelona goalkeeper Marc-Andre ter Stegen had to make his first save just two minutes into the match and deny Javier Hernandez.

The gaping hole left on the right side of Barcelona’s attack by Messi was filled by rarely-used Sandro Ramirez, who made his first Champions League start. The forward went close to making good on Luis Enrique’s selection in the 10th, but goalie Bernd Leno got a hand on his shot after Suarez had set him up.

Messi watched from the changing room as his team fell behind on what appeared to be a defensible corner.

But Jeremy Mathieu failed to jump to contest a ball swerved by Hakan Calhanoglu into the six-yard box, and Ter Stegen didn’t make a decisive move to punch out the cross that Papadopoulos nodded in.

Neymar was booked for diving in the area, but the Brazil striker almost equalized against the flow of play in the 39th when his deflected shot hit the upright. Sandro smashed the rebound, only for Papadopoulos to dive and save on the goal line.

Iniesta asked to be substituted in the 60th after he had clutched his right thigh and tumbled to the turf. He walked gingerly off the pitch.

El Haddadi then went on the 63rd and Roberto followed in the 72nd.

After Roberto scrambled in the forward’s rebound, El Haddadi beat two defenders and found Suarez unmarked in the area.

The striker made good on the pass after pivoting his body to blast a right-footed shot into the top of the net.

Read Next
Roma stunned in 3-2 defeat to BATE in Champions League
EDITORS' PICK
House energy committee chair Arroyo bats for cheap electricity
Palace warns sugar hoarders after raid on Pampanga warehouse
What to watch out for when selecting a video surveillance solution
Look Through: The fate of impounded stray dogs
Metro Manila’s COVID-19 cases on downward trend, but surge not over — OCTA
Unleash the photographer in you this World Photography Day with vivo smartphones
MOST READ
LOOK: Miel Pangilinan dazzles in glittery pre-debut shoot
DOJ indicts bank officer in $2.1 billion Wirecard fiasco
PNP bars US legislators’ visit to De Lima due to lack of authority from court
Palace warns sugar hoarders after raid on Pampanga warehouse
Don't miss out on the latest news and information.