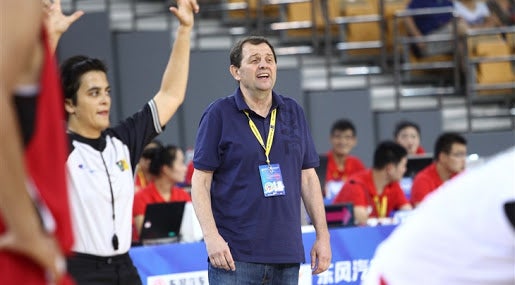 CHANGSHA CITY, China – Rajko Toroman, the first man to handle the Gilas Pilipinas program, is putting his money on the Filipinos to at least go on to play in the gold medal game of the Fiba Asia Olympic Qualifier here.

Now coaching ousted Jordan, Toroman said that road is clear for this batch of Gilas Nationals, whom he sees as playing for the lone continental berth to the 2016 Rio de Janeiro Games against either defending champion Iran or host China.

“They (Filipinos) have open way to the Finals,” Toroman said. “If they beat Lebanon, which I expect they can do, after that there is Qatar or Japan. The way to the Finals is very clear for them.”

Toroman missed advancing into what would have been an interesting quarterfinal match with his former club when the Jordanians trailed big early on Tuesday evening to go down, 76-80, to Lebanon.

Gilas slugs it out with the Lebanese in the 9:30 p.m. game on Thursday and a win would put them in the Final Four for the second straight edition after losing to the Iranians in the finals in Manila in 2013.

China battles India and the Iranians, whose only loss thus far was dealt by the Filipinos, 87-73 last week, will be tangling with South Korea also Thursday.

Both powerhouses are heavily tipped to prevail and arrange a blockbuster Final Four pairing on Friday.