Gilas needs all luck it can get in Fiba Asia final vs China, says Iran's Bahrami | Inquirer Sports

Gilas needs all luck it can get in Fiba Asia final vs China, says Iran’s Bahrami 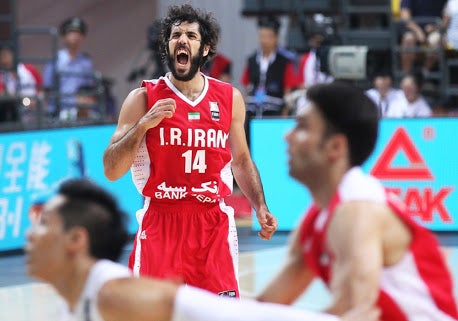 Even Bahrami thinks Gilas would all the luck it can get vs. China. Photo from Fiba.com

CHANGSHA CITY, China – Aside from Gilas Pilipinas, its few supporters here and the millions back home, there’s no other man who believes that the Filipinos could scale the Great Wall that is China in the Fiba Asia Championship’s gold medal game on Saturday.

Count Samad Nikha Bahrami, regarded as the continent’s finest swingman who tried valiantly to lift Iran against the Chinese on Friday night, as one of them.

Well, because of a lot of factors.

“I think it will be China,” Bahrami told the Inquirer when asked who he thinks would win the lone Asian berth for the 2016 Rio de Janeiro Olympics. “They’re very physical, they play very good defense and they’ re prepared for everything.

“It’s going to be hard for the Philippines to beat China.”

Bahrami and the Iranians played – and lost – against both the Chinese and the Filipinos here.

In both those games, he was the target of the defense, making him somewhat more knowledgeable than anyone else when it comes to assessing both countries.

And he also acknowledges the homecourt factor as probably China’s biggest edge, which he and his teammates didn’t feel in losing to Gilas a week ago.

“For sure, officiating will be on China’s side, like (what happened to us) today,” Bahrami said. “I wish you good luck (with the calls).”

But the true basketball man in Bahrami surfaced when the Gilas coaching staff led by Baldwin made its way in front of him, which was just minutes before the Philippines-Japan tipoff. He also loved the underdog.

“Good luck, coach,” Bahrami told Baldwin, from which the Filipino coach smiled and gave the flashy Iranian forward a wink.

“I wished them a lot of luck,” Bahrami said when he faced the Inquirer again. “They’re going to need it.”