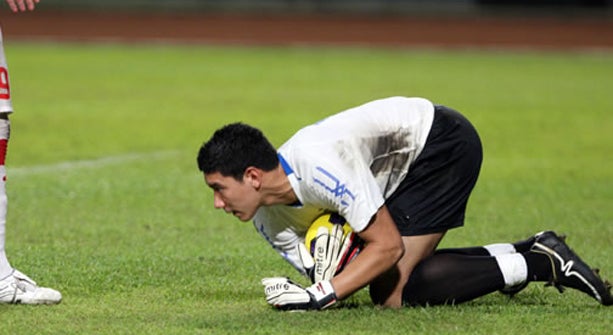 PYONGYANG—Philippine Azkals coach Thomas Dooley plans to stick with goalkeeper Neil Etheridge for the World Cup Qualifying clash with North Korea on Thursday even after his error-strewn performance in the 1-5 loss to Uzbekistan at home last month.

In what could be the most critical match of their campaign yet, the German-American mentor is keeping his faith on Etheridge who has started all three matches of the qualifying tournament so far even with the presence of Roland Muller and Patrick Deyto in the squad.

The 25-year-old Etheridge proved steady in wins over Bahrain (2-1) and Yemen (2-0) last June, but an opening-minute mistake against the Uzbeks at Philippine Sports Stadium in Bulacan last Sept. 8 helped lead to one of the heaviest defeats of the national side in recent memory.

“I told him (Etheridge) we need him [as the goalkeeper] to win games for us and I think this is one of the games that we’ll need him to step up and win it for us,” said Dooley, after the Azkals’ first training session at Kim Il-sung Stadium in this reclusive nation’s capital.

“We haven’t had much time to talk about the performance against Uzbekistan, but I’m happy at the way he has responded so far.”

“It’s great to have a relationship with coach (Dooley),” said Etheridge. “I believe that the last game against Uzbekistan was a one-off for me along with the team and I’ve got an opportunity to rectify my mistakes from the last game.”

Etheridge let the ball slip between his legs for Uzbekistan’s opening goal and Dooley said his goalkeeper could have done better in keeping out the visitors’ other scoring chances.

Four days after the debacle though, Etheridge bounced back with a Man of the Match performance for his club, Walsall, in a League One clash with Doncaster.

Etheridge has been playing regular first-team football at Walsall and even started for the League One side against English giants Chelsea late last month in a League Cup match.

Etheridge’s team suffered a 1-4 loss, but the Azkals keeper relished the experience of playing against world-class players like Falcao, Ramires and Loic Remy on the Chelsea side.

The North Koreans lead Group H with three wins from three matches with Uzbekistan on six points, just ahead of the Philippines on goal difference.

Sharing the view of team captain Phil Younghusband, Etheridge said the Azkals have no recourse but to pick up at least a point on Thursday.

“It’s our most important game so far,” said Etheridge. “We have a good, organized team in North Korea and for sure the atmosphere will be very different from our previous games.”