Pacquiao: I knew I would lose one month before Mayweather fight | Inquirer Sports

Pacquiao: I knew I would lose one month before Mayweather fight 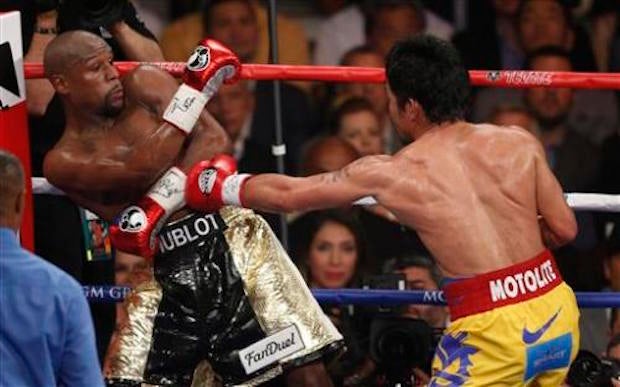 People’s champ and Sarangani Representative Manny “Pacman” Pacquiao said that he knew he would lose to Floyd Mayweather one month before the fight.

“One month before the fight nanaginip ako na natalo ako sa decision. Tapos malabo ang decision. May problema,” (I dreamt that I lost the decision. The decision was unclear. There was a problem) said Pacquiao, who is estimated to have earned $80 million to $120 million (P3.52 to P5.2 billion, $1 = P44) from the fight.

Pacquiao hinted that he had expected to lose because God “had revealed” to him what would happen.

“Naka-smile ako dahil nakita ko na ang mangyayari before pa,” (I smiled because I already saw what would happen even before) the boxer told Karen Davila of ANC’s “Headstart” on Wednesday morning.

“One month before ipinakita na sa akin. So blessed pa rin ako na na-inform ako ng Panginoon na ganito ang mangyayari,” (It was already shown me. So I am still blessed because the Lord informed that this would happen) Pacquiao added.

Pacquiao lost by decision to Mayweather who danced himself away from the Filipino boxer to take home a guaranteed purse of $120 million (P5.2 billion) and some $60 million (P2.64 billion) in pay-per-view and other earnings.

The Filipino boxer later revealed that he was injured during training when he suffered a rotator cuff injury.