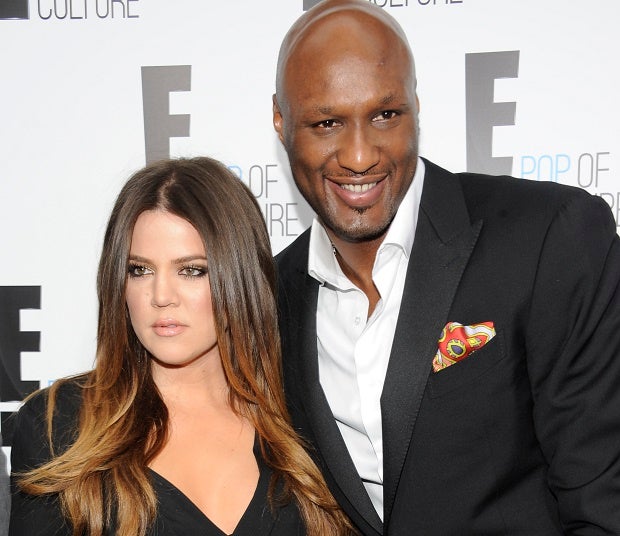 In this April 30, 2012, file photo, Khloe Kardashian Odom and Lamar Odom from the show “Keeping Up With The Kardashians” attend an E! Network upfront event at Gotham Hall in New York. A family representative says Lamar Odom has left a Las Vegas hospital and is now in the Los Angeles area to continue his recovery a week after being found unconscious at a Nevada brothel. Alvina Alston, publicist for Odom’s aunt JaNean Mercer, said Tuesday, oct. 20, 2015, that the former NBA star was transported by helicopter from Sunrise Hospital and Medical Center in Las Vegas around 5 p.m. Monday. AP Photo

LOS ANGELES—Lamar Odom and Khloe Kardashian have decided to stay married as the former NBA star continues his recovery a week after he was found unconscious at a Nevada brothel.

Kardashian’s lawyer, Laura Wasser, filed a petition Wednesday to dismiss the reality star’s divorce filing from December 2013. A clerk granted the request in such a way that the divorce papers can be refiled at a later date.

The document doesn’t state a reason for the change, but it shows Odom signed off on dismissing the divorce Tuesday.

Kardashian has been by Odom’s side since he was found in extremely critical condition Oct. 13 at the Love Ranch brothel in the rural community of Crystal, Nevada, and hospitalized in Las Vegas. He regained consciousness Friday and was transported to Los Angeles on Monday.

Kardashian posted a statement to her website Tuesday saying Odom made “incredible strides” at Sunrise Hospital and Medical Center in Las Vegas and thanking the doctors and nurses “for their kindness and diligent work.”

The hospital and Odom’s relatives have not revealed his prognosis, but the family has hinted at a long road ahead, saying they realize his “continued improvement” won’t be easy.

The brothel said workers saw him drink alcohol and take supplements sold as “herbal Viagra.” The Food and Drug Administration issued a warning in 2013 against one brand he took, Reload, after it was found to contain sildenafil, the active ingredient in prescription Viagra.

He also told at least one of the women that he had done cocaine, but the brothel says it did not see him take any drugs.

Love Ranch owner Dennis Hof has said that Odom arrived Oct. 10 for a four-day stay and spent $75,000 on two women who accompanied him in a VIP suite.

Test results from blood samples obtained through a warrant still are pending, and authorities have not ruled out the possibility of taking action against the brothel or Odom.