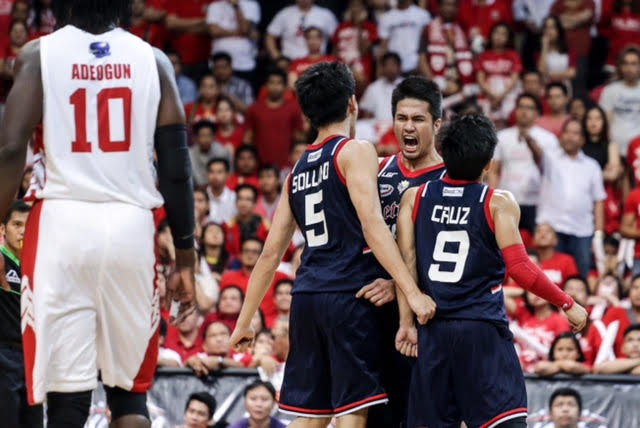 The Knights turned back archival San Beda, 85-82, in overtime of the winner-take-all Game 3 and claimed the NCAA Season 91 men’s basketball crown before a jampacked Mall of Asia Arena.

Diminutive guard Mark Cruz was named the Finals Most Valuable Player after an outstanding performance in the entire series for Letran.

Cruz had 14 points, six rebounds and seven assists in the deciding game 3 while Kevin Racal finished with 23 points, five rebounds and two assists to help their team raise Banner 17 in their final playing year.

Knights head coach Aldin Ayo set aside the glory and euphoria of a championship and said one of the biggest joys he got was the bond he and his players forged.

“Setting aside this, setting aside all these trophies the most important thing is this closeness we gained,” Ayo said. “We became close together.”

“We’re very grateful God gave us this title. We’ll do our best and God will do the rest.”

After the Red Lions had stormed back from eight points down in regulation to force OT, the Knights hung tough in clutch and regained the lead, 83-82, on a baseline jumper from Jom Sollano with 32 ticks remaining.

The Knights had a chance to finish it off in regularion after Cruz and Racal hit consecutive deep balls to put the Knights up 75-67 with 1:53 remaining.

Baser Amer, however, would spoil the fun for Letran when he pioneered the 8-0 Red Lion run to tie the game at 75-75 with 13 seconds.

San Beda, which missed a chance to take its ninth title in the last decade, took a three-point lead, 82-79, when Amer hit a floater with 1:27 left in overtime before Letran led for good.